As part of London’s International Festival of Theatre, Unicorn Theatre welcomes The Hamilton Complex, a play about the transition from girlhood to womanhood that confronts our innermost patriarchal prejudices

This accusation launches a production which tests our sensibility and moral fibre at every turn: there is eardrum-piercing screaming, knicker flashing, endless kitschy outfit changes and sexually suggestive behaviour drawn out for longer than we can bare.

The Hamilton of the play’s title is not related to Alexander but to David, a photographer who’s nude images of young girls have provoked child pornography allegations.

The girls introduce themselves with names like Charity, Eternity, and Melody, alternately pantomiming adult emotions, and bewitching with their childish raw honesty, wielding the power to discomfit their adult audience. 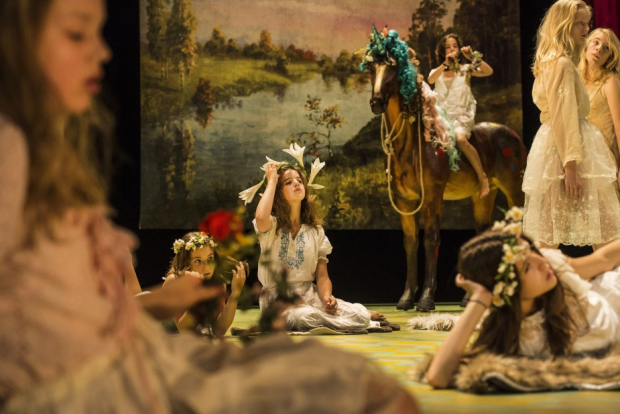 One scene sees Lovely, by far the smallest and perhaps the least touched by puberty of the girls, dancing an intimate duet alone onstage with the only adult of the cast: a male bodybuilder. The intense relationship between them is undeniable, and the line trodden between familial and inappropriate very fine indeed.

When the girls step off the stage and into the auditorium in zombie-like trances, the audience recoils from their outstretched hands for fear of getting too close.

It forces the audience to see these girls sexually and confront the patriarchal constructs within us. Do we defend their innocence? Attack their indecency? Is this need to downplay and dismiss so different from how our society treats adult female sexuality?

Unlike anything you’ve ever seen before, this daringly wanton ensemble production confronts the audience with some of their deepest and most undesirable prejudices. It’s exhausting, uncomfortable, and even offensive. And yet it’s also touching to the point of tear-jearking to be transported into the confusion of early adolescence: it is beautiful to be so uncertain, to be open to so many possibilities, to let the truth in.