8 CW readers are interested
Doctor Faustus, Duke of York's Theatre review 3 Doctor Faustus, Duke of York's Theatre review shobha prabhu-naik
After first The Maids, then The Homecoming, Jamie Lloyd continues his West End tour with a playfully macabre production of Christopher Marlowe’s Doctor Faustus at the Duke of York’s Theatre. Starring Game of Thrones’ heart-throb Kit Harington as Faustus and Olivier award-winner Jenna Russell as Mephistopheles, Lloyd’s production revels in its own celebrity status just as it reflects on the roles of icons and idols in today’s society.

Like many of his adoring audience members, Harrington begins the evening drooling, pacing around his stylized apartment as a naked and ghoulish ensemble materialize to torment him. While at first faithful to Marlowe’s text, Lloyd modernises the tale and transforms Faustus’s book of the black arts into a Macbook, conjuring up a parallel between magic and technology. 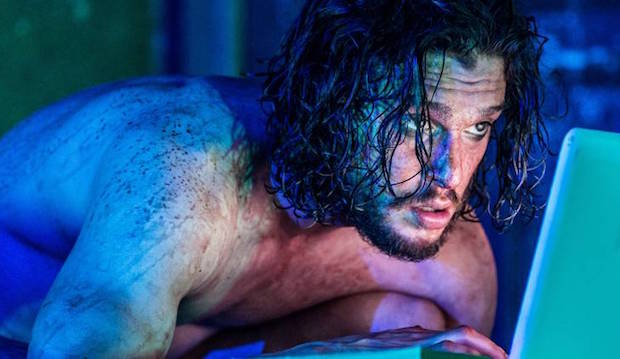 With Marlowe’s text spliced by new writing from Colin Teevan, lurid imagery continues to entice and disturb as Faustus begins his morbidly camp descent. Harrington squeezes ketchup on himself, Russell’s Mephistopheles strides on stage in a nightgown, and Tom Edden performs a raucous scene-stealing portrayal of the seven deadly sins. Faustus’s apartment, like the script, slowly deconstructs to reveal the inner workings of the theatre stage. While Lloyd takes every opportunity to do some flashy tricks, he also cleverly reveals the theatre to be a place of duplicity and showmanship, a place where illusion is seductive yet unfulfilling.

Harington is perfectly fine as Faustus and uses his own star status to riff off the fame Faustus achieves (and, as he Jade Anouka as Wagner is also a treat, and brings the only scrap of humanity to the unearthly epic. But it’s Russell who shines brightest, with a devilishly wicked yet often times blasé Mephistopheles, who spends the interval on the edge of the stage belting Meatloaf’s 'Bat Out of Hell'.

The sheer saturation of visuals is at times convoluting, and the true tragedy of Faust’s fate fails to reach celestial heights. Nevertheless, with a musical backdrop of rock n’ roll anthems and a distinct awareness of its own performance, this Doctor Faustus is a bold, daring and flamboyant tale of sorcery, morality, and celebrity that is sure to make worshippers of some and sceptics of others.