1 CW reader is interested
Patriots, Noël Coward Theatre Patriots, Noël Coward Theatre Teresa Guerreiro
Following a sell-out, critically-acclaimed run at the Almeida Theatre, Peter Morgan’s Patriots is getting a West End transfer in 2023, with Tom Hollander (The Night Manager) reprising his starring role as Berezovsky. Read our five-star of Patriots at the Almeida Theatre below, or click here to book tickets.

Peter Morgan’s Patriots is that rare thing: a play of historical and philosophical heft that sparkles like the bubbles in a flute of the best champagne, with fizzing, often very funny dialogue. The creator of such triumphs of hybrid fact/fiction as The Crown and Frost/Nixon, in Patriots Peter Morgan turns his attention to the chaotic death of Soviet communism and its nefarious long-term consequences.

Out of the ashes of the centralised state there emerged in the 1990s a capitalist free-for-all, in which the likes of mathematician Boris Berezovsky soon became a new class of unimaginably rich oligarchs through the acquisition of the country's assets, effectively ruling the country through their influence with the feeble, often drunk President Yeltsin.

He strides the Almeida’s cruciform stage with energetic glee, a mesmerising figure to whom many come for ‘krysha’ or protection and advancement. Among them are a young up-and-coming businessman, Roman Abramovich (Luke Thallon) and an awkward, seemingly harmless minor provincial politician, Vladimir Putin (Will Keen, looking uncannily like the real Putin) 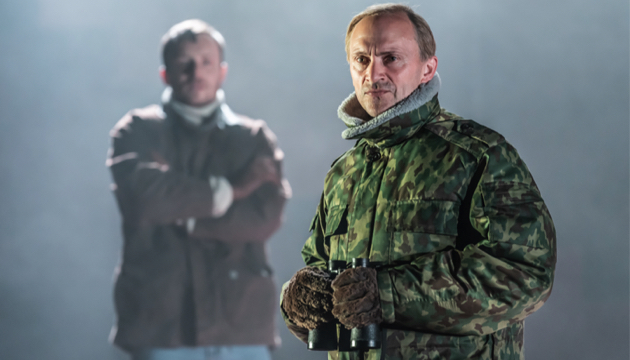 Luke Thallon as Roman Abramovich, Will Keen as Vladimir Putin in Peter Morgan's Patriots. Photo: Marc Brenner
Suffused with hubris, dazzled by his own power, Berezovsky makes the fatal mistake that will eventually bring about his spectacular downfall: he underestimates both Abramovich and, crucially, Putin.

Even as Putin smoothly slithers to the top of the pile, Berezovksy still thinks he can control him; and a chilling central scene between the two contrasts the oligarch’s arrogant bluster and the politician’s steely, self-righteous inflexibility, each claiming to be the true patriot.

There’s only going to be one winner and it’s not Berezovsky. Following a shrill denunciation of Putin’s mishandling of the submarine Kursk disaster in his TV channel, Berezovsky flees Russia. With him goes the disillusioned former secret service officer Alexander Litvinenko (Jamael Westman), whom he’s long tried to enlist as his own bodyguard. 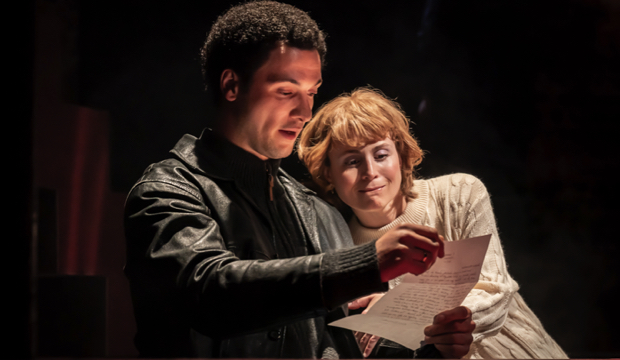 Jamael Westman and Yolanda Kettle as Alexander and Marina Litvinenko in Peter Morgan's Patriots. Photo: Marc Brenner
In London Litvinenko will eventually become the victim of polonium poisoning by agents of the Russian state; while Berezosvky will fail in his attempt to use the British courts to extract a massive payment he claims Abramovich owes him.

Given political asylum in the UK, still very rich but deprived of the power and influence that defined him, the true Russian Berezovsky pines for his homeland; his life loses all meaning – he is the true hero of Greek tragedy, brought down by a fatal character flaw.

The whole ensemble provides lively support to the protagonists who give us unforgettable characters: the blood-chilling Putin, the smooth operator Abramovich, the firebrand Litvinenko.

The evening, though, belongs to Tom Hollander: as Boris Berezovsky he offers a performance of extraordinary power and complexity, finding nuance and vulnerability among the bombast, his monstrous ambition tempered by humour and humanity.