From the workhouse, to the streets of London, to the open air stage: Oliver Twist is brought to life in new family stage show at Regent's Park Open Air Theatre

This year, as part of a two-play Charles Dickens season (which begins with a stage version of A Tale of Two Cities for adults), Oliver Twist created for everyone aged six and over comes to the outdoor stage.

The Victorian novel has been adapted by playwright Anya Reiss – a graduate of the Royal Court Young Writers programme who has impressed with Spur of the Moment and Acid Stage (Royal Court Theatre 2010 and 2011), and a new version of Uncle Vanya (St James Theatre, 2014).

Oliver Twist tells the story of one orphan's struggles, starvation, criminality and redemption. Thanks the book's enduring popularity, a musical stage show and various tv and film adaptation, the story is well known.

There's all the pathos of 'Please sir, can I have some more', the impish comedy of the pick-pocketing crew, and a dash of tragedy, terror and romance thrown in for good measure. With descriptions of the treatment of the impoverished and vulnerable in workhouses so vivid they inspired campaigns for social change in Victorian England, Oliver Twist is not the mild stuff of much children's theatre.

But it's exactly the kind of funny, thought-provoking story that should delight those ages 6 and 66 in equal measure. 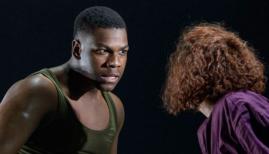