Much Ado About Nothing, National Theatre review ★★★★★

Director Simon Godwin teams up with designer Anna Fleischle to present a loud and glitzy Much Ado About Nothing, set in an Art Deco beachside hotel

Much Ado About Nothing, National Theatre review 4 Much Ado About Nothing, National Theatre review Holly CW
As the UK experiences its hottest summer ever recorded, audiences are being offered two trips to Shakespeare’s Messina via London’s South Bank. The first, which opened at Shakespeare’s Globe back in April, is Lucy Bailey’s garden-set vision for the story, a libido-fuelled take on the comedy with compelling leads and warring-then-wooing fit to make you ‘awww’. The second, now showing at the National Theatre, is the vision of Simon Godwin (Romeo and Juliet, Antony and Cleopatra): a loud and brassy, slick and classy Much Ado, with glitter and jazz hands thrown in for good measure.

Naturally, comparisons will arise, but fortunately, both are energetic, joyful and vary enough that it would not be overkill to catch both this summer. 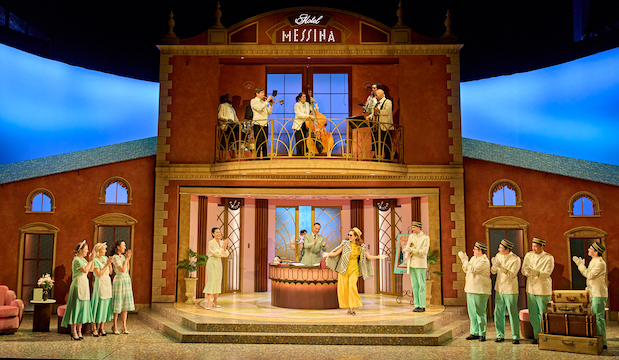 The set’s the thing in Godwin’s production. He’s teamed up with the great Anna Fleischle (Hangmen, The Forest, Hamlet) to locate the action in the beachside Hotel Messina, a 1930s, Art Deco affair with a seemingly boundless number of wholly naturalistic, highly Instagrammable rooms. A hotel lobby fitted with a smart front desk and lifts, a pamper parlour and a row of baths designed with Wes Anderson-style symmetry are among the enclaves we're led between. The revolving core of the set is the front of the hotel, which appears to be pitted and refilled with new, lavish interiors each time it spins out of view. 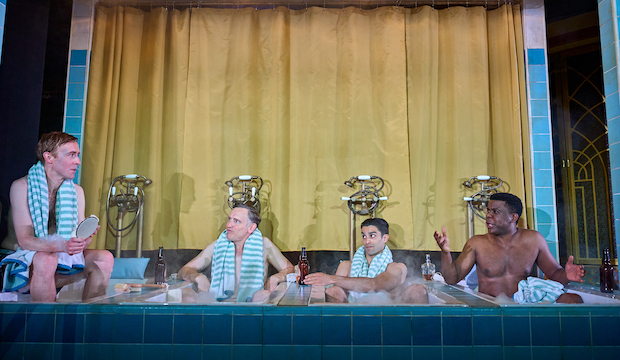 John Heffernan, Rufus Wright, Eben Figueiredo and Ashley Zhangazha in Much Ado About Nothing at the NT. Photo: Manuel Harlan

The other highlight of Godwin’s production is the microscopic attention given to every line of the text. It’s deliciously clear to listen to, with pauses introduced in unusual places, playfully offering fresh meaning to well-known phrases.

As for the players, Godwin goes against the grain in directing Ioanna Kimbook not as a sweet and compliant Hero, but as stern and defiant. As is integral to her character, she’s still the product of the patriarchy in which she’s grown up, but her furrowed brow and anguished words following the sullying of her reputation are refreshing to witness. Opposite her is Eben Figueiredo as an especially buffoonish and unlikeable Claudio, while sticking in their oars is Ashley Zhangazha as a business-like Don Pedro and Phoebe Horn as Margaret, who has a tendency to ham up the part beyond what’s required. 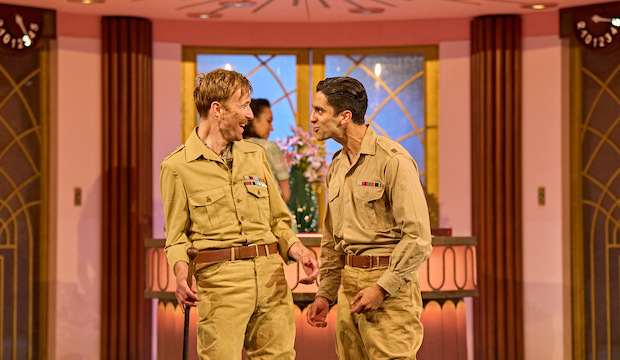 John Heffernan and Eben Figueiredo in Much Ado About Nothing at the NT. Photo: Manuel Harlan

Katherine Parkinson (Home, I’m Darling) is a sharp and glamorous Beatrice, playing opposite John Heffernan (Edward II) as an unusually gawky Benedick. He's clearly a decent physical performer – falling face-first from his hammock in one scene – but he's robbed of giving a showier performance in his spying scene, hidden instead inside an old-fashioned gelato cart, with Rufus Wright’s Leonato earning the laughs for dumping ice cream and sprinkles on his head.

Despite both being accomplished performers (and spending much of the second half with their mouths covered in kiss-smeared lipstick), Parkinson and Heffernan don’t quite gel as the reluctant lovers; their first kiss – often a moment of spontaneous whooping from the audience – raises just an awkward murmur on press night.

Still, never mind, because this glitzy, fluffy take on the Bard’s Sicilian comedy is a balm to real world troubles and, if you catch it soon enough, a breezy escape from the blistering heat outside. 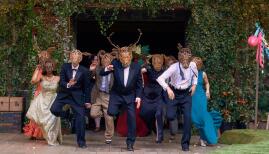 Much Ado About Nothing, Shakespeare’s Globe review 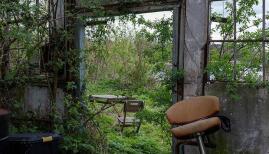