An engrossing new play at the National's Lyttelton Theatre takes audiences back to 1759, where a young woman is sentenced to hang for murder.

Playwright Lucy Kirkwood, who explored international relations between the US and China in 2013's dazzling Olivier-winner Chimerica and dramatised a nuclear disaster in The Children (Royal Court, 2016), turns her talents to themes of justice and power in this epic yet intimate story.

James Macdonald directs an atmospheric if occasionally laboured production, relying on blackouts and strobe lights to build the tension between scenes. 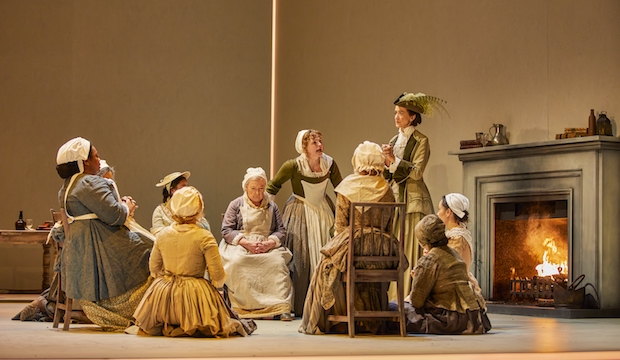 Taking its title from an old literary term for heavenly skies, The Welkin revolves around a group of women in rural Suffolk faced with a grave decision. When convicted murderer Sally Poppy (a spirited Ria Zmitrowicz) claims to be pregnant and therefore exempt from the death penalty, a jury of 12 women must decide whether she is telling the truth or lying to escape the noose.

Having delivered hundreds of babies, including the convict herself, midwife Elizabeth Luke (Maxine Peake) has the expertise to recognise early pregnancy, but she is troubled by the moral weight of the decision. And others in the jury just want to see Sally executed, baby or no baby.

As the women debate the predicament and scrutinise the prisoner for signs of swelling or lactation, they share their own experiences and opinions with gutsy glee. Kirkwood gives such depth and insight in the course of the three-hour drama that we invest in each character. It’s glorious (and all too rare) to see a stage full of women and a narrative that doesn’t revolve around men. 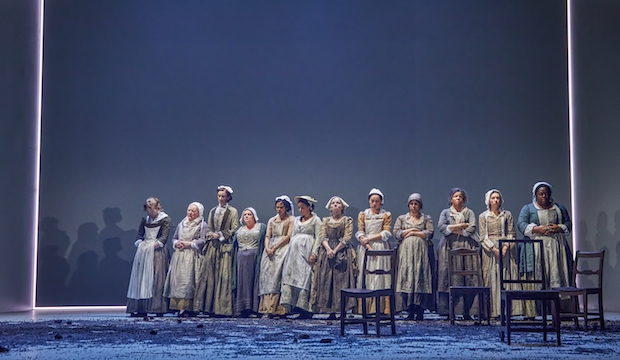 Belly laughs, gasps and knowing nods abound as the confessional candour shows how little the female experience has changed from the 1750s to the present day. The show is especially eloquent on shared but unseen suffering, from menopausal sweats to recurrent miscarriage. But it’s also alive with drama, intrigue and plot twists.

For all its vivacity and ambition, The Welkin is far from perfect. It needs editing down and tightening up. There are occasional whiffs of twee GCSE drama – especially in a spontaneous and long Kate Bush singalong. And a few of the Suffolk accents are iffy.

But this rabble of rowdy women have more than enough life and freshness to leave us hooked right until the brutal, bitter end.