Le Petit Chaperon Rouge, The Coronet Theatre Le Petit Chaperon Rouge, The Coronet Theatre Holly CW
French writer-director Joël Pommerat is known for creating spell-binding theatre that engulfs the viewer in the story, never shying away from the tale's gritty, dark corners, while simultaneously charming us with its magic. His extensive repertoire features several works for children, including sugar-free adaptations of fairy tales, including Pinocchio and Cendrillon (Cinderella). His first foray into the genre was with Le Petit Chaperon Rouge (Little Red Riding Hood) back in 2004, a production he created to help his daughter, Agathe, understand his work.

In the years since, Le Petit Chaperon Rouge has impressed audiences the world over, but neither the show nor any other titles from Pommerat's repertoire have been seen in London. That is, until now: this autumn, Pommerat and his company Louis Brouillard are reviving Le Petit Chaperon Rouge, with the help of Institut français du Royaume-Uni, at Notting Hill’s The Coronet Theatre.

In Pommerat's fresh and visually enchanting take on the familiar story, the focal young girl, recognisable by her red cape, is forced to face the Big Bad Wolf all on her own, after her mother neglects her. This is a fairy tale for the real world, with vivid themes of desire, fear, loneliness and freedom all bubbling away below the surface. The action plays out on a minimally dressed yet bewitching stage designed by Éric Soyer and Marguerite Bordat, with Rodolphe Martin fulfilling the role of narrator; Valérie Vinci that of the little girl and grandmother; and Isabelle Rivoal portraying both the mother and the wolf.

The 45-minute production, performed in French with English subtitles, is suitable for audiences aged upwards of eight. A post-show discussion following each performance offers little ones the chance to ask any questions and unpick the darker themes in a story which has been captivating children for generations. 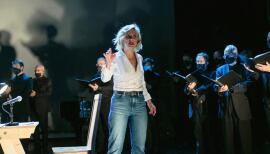 Yitzhak Rabin: Chronicle of an Assassination, The Coronet Theatre 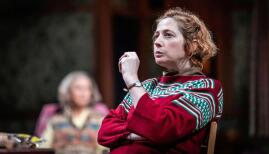