West dies and is reincarnated in the 27-year-old Annie (Imogen Doel). She leads an unremarkable life working in face cream PR, living in the shadow of her ‘perfect’ (but underwritten) sister, and looking after her sick mother. Until one day Annie wakes up looking and sounding like Kanye – to everyone but the audience. She then has to choose between trying to remain herself or living as the famous rapper (and milking the cash cow). 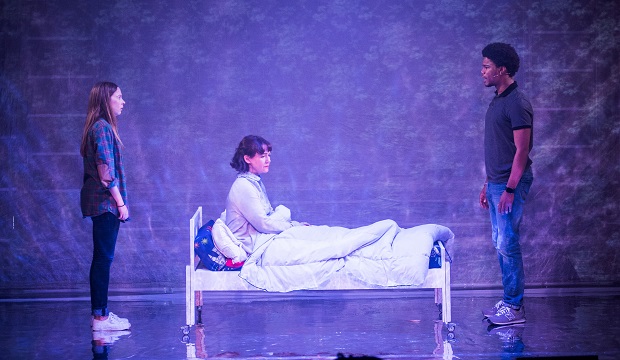 It's a strange, silly and audaciously hilarious premise. Steiner captures Annie the average millennial women with rich detail, building a past world through anecdotes and humour. By comparison, Kanye feels far more hollow, the product of just a few subtle references. (There's not even that much Kanye in the soundtrack).

As the narrative is complicated by multiple sex tape scenarios and blackmailing exes, the parallels between the 'normal' and 'celebrity' lives feel increasingly strained and confusing.

Kanye the First is a play stuffed with plot, crammed with ideas and accented with multi-media projections. It's tricky to keep track of Steiner's point sometimes; issues surrounding celebrity culture, exploitation and race are pertinent and timely, but way too tangled to really enlighten.

It’s far from Kanye the Worst (comedy and strong performances make the sprawling plot watchable), but much like its namesake, this is a play that would benefit by reigning its ambition in to the limitations of its form.