It's a co-production between the Royal Court and Improbable theatre company, who are renowned for pioneering work that triggers social change.

Drawing on the challenges and triumphs Lisa has experienced as wheelchair user, the show examines our relationship with disability. Improv, sketch show, comedy and verbatim theatre come together in a mischievous medley as Still No Idea explores society's well-intentioned attempts at inclusivity.

There may be more disabled people featured in mainstream media than before, but just how broad are the opportunities that are actually on offer?

It's a serious subject, but Hammond and Spence have a knack for combining profundity with levity. When the writers/performers/theatre makers first broached such subjects in No Idea, it was praised as 'pin sharp, provocative and hugely entertaining', and 'hilariously rude and naughty'.

We look forward to seeing how the story continues in Still No Idea. The show opens at Finchley's Art Depot on 22 September, before going on a regional tour and returning to London for a run at the Royal Court from 21 October – 17 November. 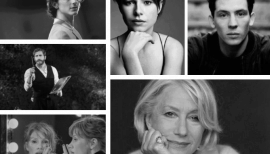