Mischief and mayhem reign in Shakespeare’s second trilogy of History plays, which pull Prince Harry off his pedestal in favour of a kaleidoscope of characters

Directors Federay Holmes and Sarah Bedi stay true to the Globe’s tradition of making Shakespeare relatable. Humour is updated, with slut-drops and references to Hamilton woven in amongst Shakespeare’s colourful insults. Pints are stolen by tavern revellers, and you may even (God forbid) become the object of wizened old Justice Shallow’s drunken affections.

Usually when performed together this trilogy focuses on the evolution of Prince Hal into King Henry, cutting scenes superfluous to the hero’s story arc.

But these productions are filled with voices. Each play is performed by the same ensemble cast, together playing over 100 parts. These characters are not foils to a developing hero, with an endless range of agenda.

Minor characters are given the floor, enriching our understanding of events with their own unique viewpoint. A humble luggage boy tersely sends-up his inept superiors in Henry V, whilst back in Henry IV Part 2 Mistress Quickly shows the human cost of the reckless pranks of Falstaff and his posse of companions, terrified of the endless ‘swaggerers’ that charge through her door and harm the prostitute Doll Tearsheet. 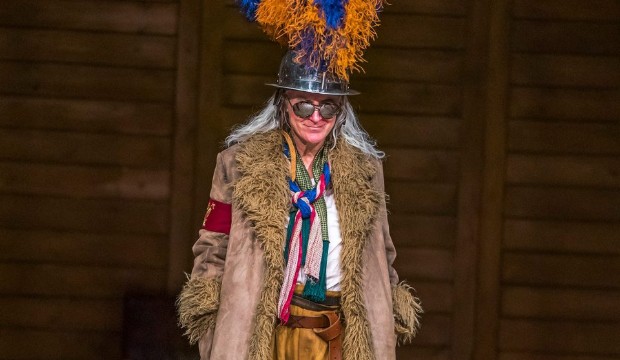 The result is an engaging journey along meanders and dead ends. The trilogy has a Game of Thrones-esque panoply of characters, some set-up for long-term significance only to be unexpectedly killed off during the play’s civil and national wars.

Each production is very different in tone, and to emphasise levelling of character importance, are renamed in honour of a single character. Henry IV Part 1 is re-branded as Hotspur, after Harry Hotspur, the play dragged forward with the force of his riotous northern rebellion.

Michelle Terry (the Globe’s Artistic Director) endears as the man of honour and anger. She squeezes comedy out of Hotspur’s attempts to control his careering temper, suddenly pausing mid-rant, lying on the floor and furiously counting to ten.

Henry IV Part 2 slows to the leisurely, swaggering pace of the infamous Sir John Falstaff, rotund clown and professional alcoholic. It is a more sombre, downbeat offering, more talking than action, as the older characters contemplate their mortality.

Helen Schlesinger (Albion, Coriolanus) gives a spry interpretation of the fat knight, a demur pot-belly being the only nod to Falstaff’s obesity. Freed from his waddling gait, this ‘huge hill of flesh’ becomes an acrobatic jester. Schlesinger gallavants up and down at the thought of the next cup of wine, rolls over backward when presented with a bag of gold and enjoys a salacious salsa with Doll Tearsheet.

Schlesinger bears a startling resemblance (in voice and looks) to Jennifer Saunders, giving her Falstaff the feel of a Tudor Eddie Monsoon, oozing a sassy hedonism in an Absolutely Fabulous fur-coat.

But the stand-out performance is from Sarah Amankwah (Doctor Faustus, World War Z), who gradually turns from a chuckle-headed Prince, one of many in Falstaff’s band of miscreants, to the dignified King who leads armies to war in Henry V (or rather Harry England). 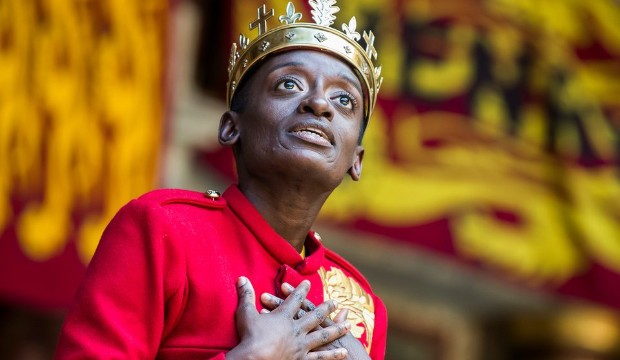 Amankwah’s stage presence is remarkable. A strange power dwells behind her bulging tiger eyes, and within her deep, husky voice. Her range is broad, excelling at both ragamuffin comic (delivering a hilarious impression of her bumbling, uptight father, Henry IV) and terrifying warlord (pity the messenger who delivers her a mocking message from the French dauphin). Amankwah is someone to keep a tab on.

Each play has been set up to be self-contained, but on certain dates you can see all three back-to-back (at a 15% discount). But less may be more. Meanders do not allow for much of a story arc, so there is little dialogue between the productions. The humour starts to feel slightly formulaic after twelve hours, and you may emerge (as this reviewer did) with bleary eyes and a head buzzing with ‘good my Lords’, ‘how nows’, ‘forsooths’ and other archaic earworms.

If you see only one, make it Henry V. It ricochets from high-flying historical drama to ridiculous slapstick, with beautiful a cappella songs and one of the funniest bits of cross-dressing you’re ever likely to see. Imagine Henry V having to woo a French Princess in the form of a burly Anthony Hopkins lookalike in a buzzcut and full-length ballgown.