Chilean playwright Guillermo Calderón explores what it takes to trigger change in a new play, B, at the Royal Court Downstairs

3 CW readers are interested
B, Royal Court review 3 B, Royal Court review Frankie Crossley
B is for bombs… but you can’t use the B word. Instead, anarchist teenagers Marcela (Aimee-Ffion Edwards) and Alejandra (Danusia Samal) plan to plant a ‘cheese’ or a ‘cow’. They want to make a noise and to upset the status quo.

They are angry and idealistic, but is that enough?

Chilean playwright Guillermo Calderón's play about anger and the possibility of change comes to the Royal Court in an English version translated William Gregory.

In a sparse, anonymous flat the two girls plan to explode a bank in the middle of the night. It's change, not violence they seek. Poverty is rife, punishment has lost its power, and ‘the cause’ is increasingly muddled.

Then they meet José Miguel, who makes the bombs. He is from a different generation, a time when revolution was ripe and activism alive. And he wants to start a war.

Oh and then there's nosy neighbour Carmen (Sarah Niles), who keeps popping round at inopportune moments.

Switching from the farce of misunderstandings and ridiculous scenarios to terse poetry, the play intensifies over one hour and 20 minutes.

We see the chaos and absurd comedy of radicalisation, but we also get a glimpse into the suffering that inspires it. Though some of the monologues, reflecting on imprisoned friends and failed revolutions, are insightful, there’s an abstraction to the narrative.

You never really feel the high stakes or heart-hammering impact of the violent subject matter. So, while it’s sparky enough, B lacks the intensity and intrigue to have an explosive impact.

Click here to find out more about the Royal Court 2017 Season.
B comes to London as part of International Playwrights: A Genesis Foundation Project, and it will run in the Royal Court Downstairs Theatre alongside Victory Condition, alternating nights in rep. Some performances start at 7pm, others 9pm.

B, the Royal Court 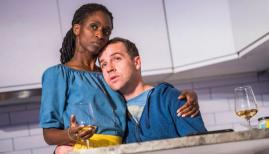