Katherine Parkinson starts in E.V. Crowe's surreal story about a woman whose life unravels when she loses a shoe

It starts with a shoe... 'You've lost a shoe. You've only got one shoe,' remarks a fellow commuter as Viv rushes to work on the tube. 'How rude. How dare you,' thinks Viv. But it is true, she is hobbling through London with only one shoe. They were her only pair of shoes and she can't afford to replace them, so Viv must go about her day.

Nursery rhyme buoyancy, robotic repetition and a Beckettian sense of the surreal shape E.V. Crowe's writing as this sharp 65-minute drama follows a middle class woman totally unravelling. Viv, played with zest by Katherine Parkinson, has a husband, a child, a house, a mortgage and a respectable job. But these solid trappings feel increasingly fragile as the loss of a shoe sends her spiralling into destitution. She speaks directly to the audience in an increasingly desperate but relentlessly cheery monologue, constantly apologising and telling herself to 'buck up'.

Dressed up in primary colours, a high heel and overly pink blusher, Viv an exaggerated, over-done image of a woman, and her experiences of insecurity, loneliness and physical pain build a tick list of the female experience. 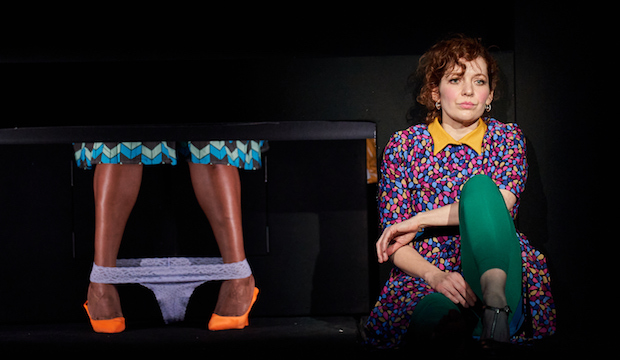 Chloe Lamford's seemingly simple set design proves to be as playful as the language, with a central conveyor belt making Viv like a rodent in a wheel, constantly running. Director Vicky Featherstone channels this pace, giving the events a spiralling speed and creating plenty of space and life for the stream of consciousness narration.

For all the singsong strangeness of the writing, it digs into harder economic truths, exploring the vulnerability of some supposedly 'middle class' families. It's an illuminating message, but there's never quite enough depth or humanity to really let it percolate.

Instead Shoe Lady is an amusing and occasionally thought-provoking satire on the proximity of chaos in daily life.