James Newton brilliantly plays Tobias, a deadpan German language teacher who is new to the school, and whose outsider status provides an entryway for the audience. Newton is the lens through which we see both classroom and staffroom, and as he narrates, he imbues the piece with a charm and deep affection for a world that seems so strange yet still loveable to him. 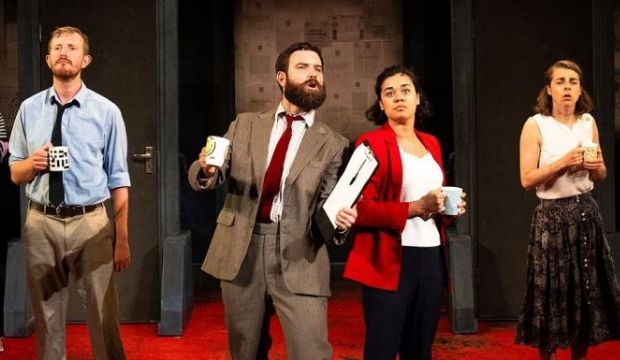 The rest of the cast rotates between playing teachers and students as they prepare for the final assembly on Muck Up Day. Emily Greenslade is a student whose attitude and behavioural issues prohibit her from attending a trip to York, while Jesse Meadows portrays Sue Belltop-Doyle, an English teacher who is passionate about education but has little authority over her classes. These parallel storylines intertwine and reach their peak in a narrative which is nicely constructed but admittedly a bit formulaic.

Yet the infectious charm of Education Education Education does not lie in its characters or storylines, even though they do offer some great moments (Ben Vardy plays a PE teacher who becomes obsessed with a Tamagotchi, for instance). Instead, it’s the deep affection and care Wardrobe Ensemble bestow to the era that delights, even as they astutely criticise views of the time, such as a perceived grandeur of British culture and the belief in hope as a governing force of change. It also clearly outlines the constant failings of the government to properly fund and support state education. You can see why Education Education Education was a Fringe award-winning piece in 2017: is not just well crafted theatre, it’s joyful theatre that rouses audiences and continues to capture a real moment in time.