Steve Waters shows how politics are coming full circle in this potent, pacy and all too prescient new play about the 1981 Labour Party split

This is Britain in 1981, but of course the parallels with present day politics are uncanny; there’s 'a divisive left-wing leader at the helm of the Labour Party. A Conservative prime minister battling with her cabinet. An identity crisis on a national scale.'

Limehouse, a world premiere by documentary-style theatre maker Steve Waters, looks back almost 40 years to explore the day the Labour Party split and the SDP was born.

On 26 March 1981 Shirley Williams, Bill Rodgers, David Owen and Roy Jenkins went from prominent politicians to the 'Gang of Four'. The story is the stuff of old newspaper cuttings and the hazy memory of many theatregoers, but you don’t need to brush up on 1980s Labour trivia to be engrossed.

Waters gives us a fly-on-the-wall fictionalised account of the 12 hours in which the Social Democratic Party was born. From David Owen’s stress-induced insomnia to the press photo shoot announcing the birth of new political party, the story delves deep into politics against a domestic backdrop.

There’s something Shakespearean about the power-play, plotting and political rhetoric, yet the dialogue is never overblown beyond the cadences of ordinary speech. (You'd be forgiven for thinking it's a verbatim transcript).

Ambitious MP David (Tom Goodman-Hill) is despairing over the ‘calamitous’ state of his party. With the masterminding guidance of his wife Debbie (played with all the requisite smoothness by Nathalie Armin), David decides to take action – in the form of a convivial kitchen lunch. Three fellow politicians are summoned to be co-conspirators in a plot to leave Labour and form a new party.

Superlative performances all round breathe humanity and humour into figures known only for their public personas. Paul Chahidi is a wonderfully uppity, somewhat goofy Bill Rodgers, arguing for practical politics over lofty language. Debra Gillett is at once frank and impassioned as Shirley Williams. And Roger Allam is tremendous fun to watch as Roy Jenkins, dripping with pomposity and delivering barbs with a lisp ‘I am weplete in terms of caffeinated wefreshment.’

For all the manifesto debate and dead MP name-dropping, Limehouse is anything but arid. Polly Findlay’s production stays pacy, channelling the urgency of the discussions, ensuring the party political discussion never feels Laboured. But it's the play's very subject matter – the black mirror 1981's unrest holds up to 2017's government – that makes Limehouse such a coup. It's the source of the loudest laughs and the essence of that elegiac quality when an epilogue tells us what we already know; despite all the efforts and hopes, 36 years later we are in the same political pickle.

Public booking for Limehouse at the Donmar Warehouse opens on Tuesday 6 December. 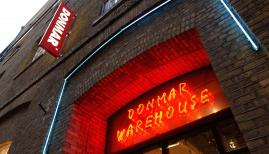