16 CW readers are interested
Counting Sheep, The Vaults review 4 Counting Sheep, The Vaults review Holly CW
It’s an immersive Ukrainian folk opera, Counting Sheep, that’s the headline show of VAULT Festival 2019. Set during the Ukrainian revolution, it follows the true story of show creators Mark and Marichka Marczyk, who met and fell in love on the barricades of Kiev's Maidan Square in 2014. Counting Sheep premiered at the Edinburgh Festival Fringe in 2016, where it was a critically-acclaimed hit. Now, the Marczyks have brought in co-directors of Belarus Free Theatre, Natalia Kaliada and Nicolai Khalezin, to direct a new version of the show.

For those in need of a refresher: the Ukrainian revolution with its wave of ‘Euromaidan’ protests was sparked by President Yanukovych going back on his promise to sign an agreement with the European Union (which Ukraine is not currently part of), which would have provided Ukraine with funds in return for liberalising reforms. Instead, Yanukovych signed a treaty and multibillion-dollar loan with Russia, igniting fury among pro-Europe Ukrainians. 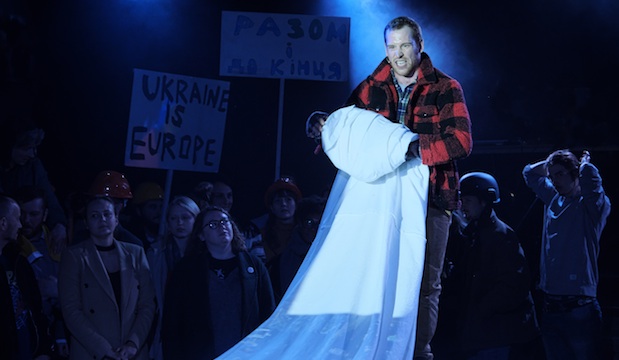 Counting Sheep doesn’t shy away from the devastating realities of the clashes that ensued, officially leaving 103 dead but unofficially killing many more. The show feels all the more poignant for being staged on the brink of the UK leaving the EU, acting as a potent reminder of what those from other nations suffered in their fight to be closer to the union.

With the help of real footage of Ukraine projected on the walls, we’re first taken on a whirlwind jaunt through a wedding celebration. We eat, cheer on the happy couple and dance around the table accompanied by live performances of traditional Ukrainian folk songs. But soon we’re catapulted into the heart of the Maidan Square protests, where we shift sandbags, roll tyres and help to built the fortress where our protagonists meet.

The show is immersive, but audience members can choose whether or not they want to fully immerse themselves. When booking tickets, you’ll be asked whether you want to be an ‘observer’, watching from the stalls either side of the stage; a ‘protester’, getting involved with everything from wedding dances to building the barricade; or a 'premium protester', enjoying soup and vodka shots at the high table before joining the rest of the protesters for the body of the show. 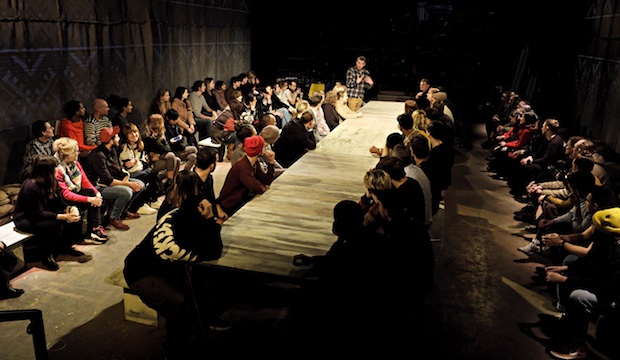 Wherever you sit, open sandwiches are passed around for all – no doubt an addition to the show brought about by Kaliada and Khalezin. With Belarus Free Theatre, the pair wooed their Trash Cuisine audiences with beetroot soup, while those who saw their Staging a Revolution at the Young Vic were invited to tuck into herring on bread after the show.

We opted to be protesters, a decision we were more thankful for when tucking into sandwiches topped with beetroot purée than when awkwardly dancing in pairs around the wedding table. Still, protests have the better deal: with long scenes dedicated to immersing active audience members in the spirit of the show, it’s hard to gauge how interesting these episodes would have been to observe from afar.

The show is steeped in impressive physical sequences, such as when Georgina Beaty walks across fragile blocks held only by other cast members and when the waltzing couples eerily transition into bodies collapsing onto one another. 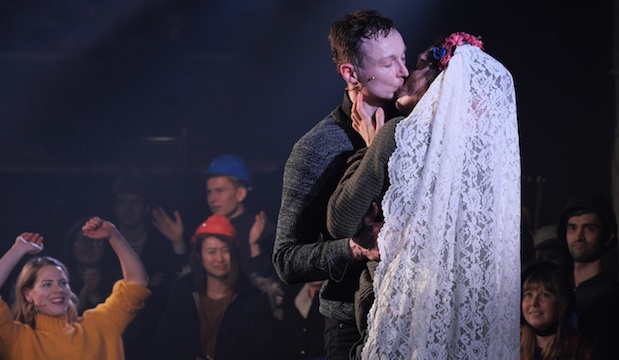 Between real footage from the aftermath of the clashes and Masha Sazonava’s harrowing on-stage performance as a grieving woman, Counting Sheep does a first-rate job of plunging its viewers into the war-torn world it depicts. It makes painful, gut-wrenching and frightening viewing, but prevails as a window onto the human stories beneath the strife of a nation, largely uncaptured by media coverage.

Ultimately, Counting Sheep is a visual, all-encompassing reminder of the Ukrainians who were jailed or killed for their dreams of belonging in the EU, and benefiting from its funding and humanitarian standards. It's all the more powerful for being told at a time when the UK is relinquishing those privileges.