The Kid Stays in the Picture, Royal Court review ★★★★★

The rise and fall of prolific producer Robert Evans, the talent behind Rosemary's Baby, The Godfather and Chinatown, forms the basis of The Kid Stays in the Picture.

'I went from royalty to infamy. Royalty fades. Infamy stays' – so runs Evans's life story. Through the 1970s, after a dizzying rise from movie novice to the head of Paramount Pictures, he transformed the studio into a powerhouse. By 1980 he was publicly shamed.

An ensemble cast of eight actors assume multiple roles, without ever reducing the real life characters to vague impression. Thanks to masterful voice work and evocative costumes, it’s made completely feasible for one actor to embody a young Robert Evans, Mia Farrow and Ali Macgraw. But interspersed through this tapestry of Hollywood history - the Faye Dunaways, Henry Kissengers, Roman Polanksis - there is a candid account of one man's attempts to balance professional ambition with personal fulfilment.

The Kid Stays in the Picture is a story about stories - well-known film plots and the knottier narratives behind them. And it’s in this layering that the production transcends from interesting backstory to become a compelling theatrical experience. Multimedia staging, with projections, amplifications and film clips shows us multiple angles and gives a pacy quality. The effect is fittingly filmic, but more like a series of amped-up trailers than a full feature film. The depth comes in the rendering of Evans, who for all his remarkable achievements, is written and rendered with affecting humanity.

Click here to find out more about the Royal Court 2017 Season. 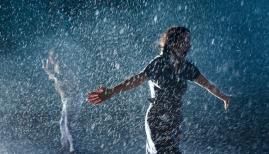