Spirited performances from some of our favourite actors can't save this over-stuffed, under-charged epic

Clearly so was playwright DC Moore, who crams every other conceivable narrative into his new two-and-a-half hour play, Common – billed as 'an epic tale of England's lost land'.

The over-egged story is told through a colourful olde worlde dialect, with a bouncy rhythm borne from a tautological excess of words.

The heightened macabre is amusing enough initially, but the overall is effect is that of mannered, slightly silly Sunday night period drama – except there’s at least four seasons’ worth of increasingly over-the-top plot packed into one play. You don't get any time to know or care about the characters between each graphic fight or florid seduction. 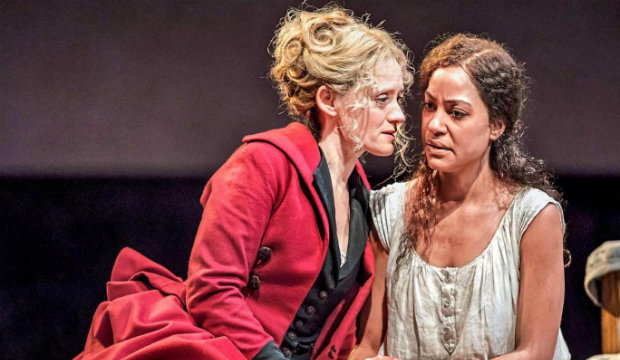 Anne-Marie Duff as Mary and Cush Jumbo as Laura

After an opening ritualistic harvest dance from the large ensemble cast, Anne-Marie Duff holds court as scheming rogue, Mary. She speaks directly and knowingly to the audience, bringing us into her confidence in a manner that feels forced in the vast Olivier auditorium. Duff is vivacious enough to just about make it work, but there’s a strained sense of polite awkwardness to the audience titters.

The ensuing story is too sprawling to summarise, but highlights include Cush Jumbo as superstitious country girl Laura and John Dagleish as her brother, King.

Along with Duff, these are actors who can illuminate a stage and compel the audience, but their talents are too tangled up in this muddle.

Headlong Theatre director Jeremy Herrin matches the pace to the plot developments, drawing the issues of privatisation, public amenities and class clashes into a none-too-subtle reflection of contemporary politics. 'What beasts rule this world?' Mary implores, as the voice of the common people.

Instead of exploring these parallels, Common buries them in a muddy heap of intrigue, fake blood and far-fetched plot.