Brian & Roger – A Highly Offensive Play has opened the Menier Chocolate Factory’s new smaller space, The Mixing Room (formerly the independent fringe venue The Bunker, which closed in early 2020, conveniently before the pandemic). Skinner reprises his audio role as Roger, while the notably younger Simon Lipkin (known for his work in musical theatre, including the Nativity! movies and Guys and Dolls on the West End) steps in to play Brian, after Peacock pulled out of the production for health reasons. The Menier’s artistic director David Babani directs. 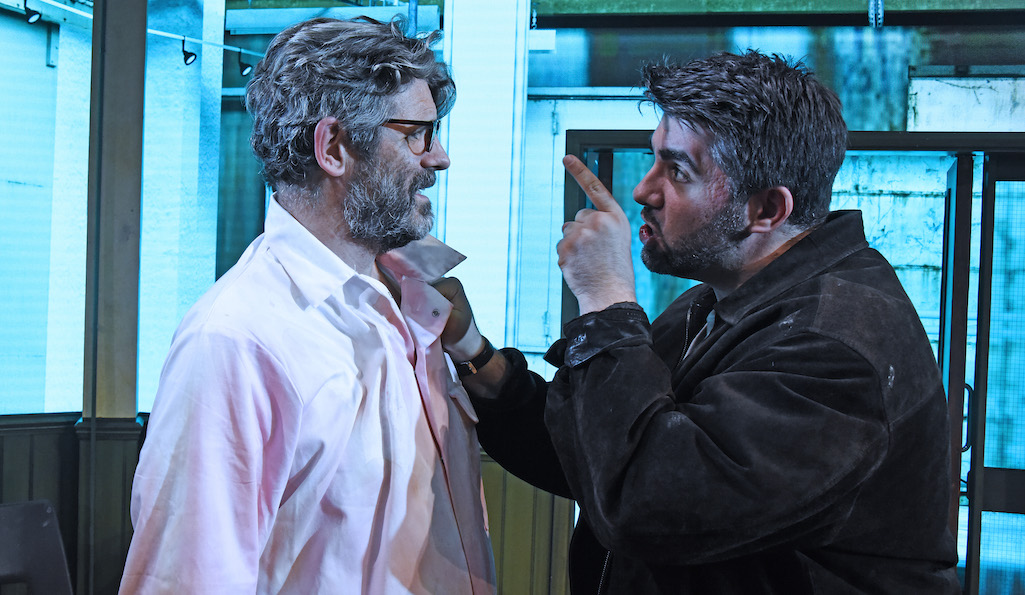 Piggybacking on the format of the podcast, the show unfolds as a series of voicemails between the two unlikely friends, who have met in a support group for recently divorced men. Roger genuinely wants to make amends with his wife Claire and repair his relationship with his son Jamie, while Brian is there to dodge paying alimony. But while Roger leans on Brian for advice, Brian recognises in Roger a gullible puppy who's willing to carry out his absurdly dangerous and criminal money-making schemes.

What initially appears to be selfishness on Brian’s part – inviting Roger to watch a film but making him stand so that he, Brian, can sit on the only chair – quickly escalates, with Brian's requests and Roger's compliance becoming more surreal with each new turn. The hopeless Roger allows his cut-throat companion to lead him into a gangster-run gambling night, a snake-laden den and eventually on a mission to move a village in China, despite Brian using him as bait each time. 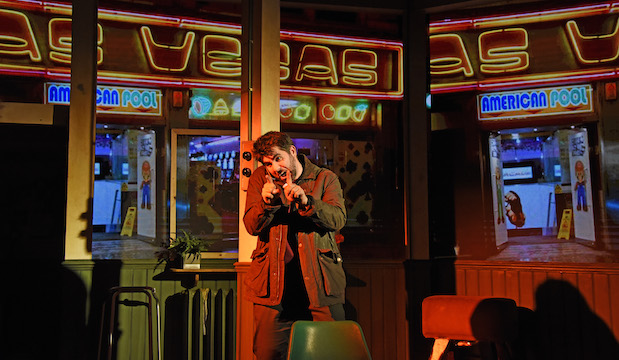 It is funny, initially, and were Brian & Roger under an hour long, its esteemed creative team could probably have gotten away with letting it roll like an extended podcast episode. But the problem is it doesn’t go anywhere, and the same tropes start to feel tired as the first hour bleeds into the second. While this format works for a sit-com, which you tune into for quick laughs and predictability, it’s tedious to watch on stage for this duration.

The humour itself is blokey, and like a subtler, gentler but ultimately less funny Dear Joan and Jericha (though this reviewer is ultimately not the target audience). Skinner brings a deadpan soppiness to Roger and in contrast, Lipkin’s Brian is bullish and manic. Both are men you’ve probably met in real life and on press night, both performances attract wild laughter from the audience – many of whom are presumably fans of the podcast. 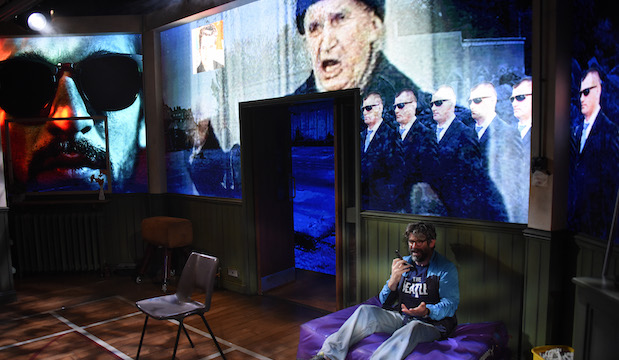 If one thing is exceptional about Brian & Roger on stage, it’s Timothy Bird’s video design, which transforms what initially looks like a drab school hall into the play’s ambitious carousel of settings, including a fusty pensioner’s home, a hospital, a moving bus and the streets of a busy Chinese city, through a series of impressively life-like projections. In one especially memorable scene, Bird evokes E4’s Fonejacker, illustrating one of Brian’s fantastical anecdotes by populating the studio wall with digitalised, magazine-style cut-outs of its unlikely gaggle of characters.

There’s clearly an audience for Brian & Roger, and these characters have the potential to enthral on stage, but copying and pasting the format from podcast to play is lazy editing. This show needs another stint in the writers’ lab or at least a good trimming to fulfil its true potential.