Boudica, Shakespeare's Globe review 3 Boudica, Shakespeare's Globe review Natasha Burton
The great and mysterious Boudica, a rebel warrior queen to some, a historical feminist figure to others, is resurrected in Tristan Bernays’s new epic at the Globe Theatre. Sources detailing her uprising against the Romans are scarce, leaving Bernay to craft a pulsating, clashing Britain where Gina McKee leads the charge. Entertaining and sturdy, but not revelatory, Boudica is a sword-wielding epic that strikes many blows but occasionally misses its mark.

Following King Prasutagus’s death and an unjust usurpation of his lands, Boudica challenges Catus (Samuel Collings), Procurator of Rome, who then flogs her and allows her daughters to be raped by Roman soldiers. Bernays writes in iambic pentameter verse as well as slang speech, establishing an ancient world that still seems near at hand. The humour is effective but a tad predictable, while moments of Bernays’ poetry resonate well.

TRY CULTURE WHISPER
Receive free tickets & insider tips to unlock the best of London — direct to your inbox
But even with its title, the real heart of Bernays’ Boudica are the daughters, here named Alonna (Joan Iyiola ) and Blodwynn (Natalie Simpson). They cleverly represent different reactions to the cruelty they faced, Blodwynn seeking revenge and Alonna championing peace. It’s an insightful and contemporary addition to the myth that adds a layer of complexity to themes of vengeance, imperialism, and justice. A pessimistic Suetonius (Clifford Samuel), a Roman General who is fatalistic about the empire’s future, also adds a dimension to the tale, with Samuel offering an empathetic enemy. But both Iyiola and Simpson are the stand-outs, establishing an intimate sisterly connection that is progressively marred by their stances.

Unfortunately, their culminating scene together is more of an epilogue to the action and sits strangely in the rest of the script. Boudica is instead given the climactic moment, and while staged beautifully and well delivered by McKee, it doesn’t entirely grip. McKee is an empowered Boudica and is strong in soliloquy, but she doesn’t offer enough intimidation or ferocity in a crowd.

With a large wooden wall that’s razed to the ground, Romans abseiling the Globe’s gallery, and heavy drumming music, Boudica is action-packed and full of ambitious battles. These are impressive, but they also act as a weakness: so epic in stature that it almost resembles an action film restrained to the stage.

Some bewildering choices are also made, including a baffling but rousing rendition of London Calling from Forbes Masson’s Cunobeline, which after no hint of anachronism in the first half takes place after the intermission. Also, a looming figure of the Iceni war goddess Andraste (Anna-Maria Nabirye) shadows Boudica, which works well, but at one time is adorned in a bizarre futuristic astronaut-like costume.

Nevertheless, Boudica works to rile up an audience. Visually striking and often arousing, it is an engaging and at times thoughtful imagining of this continuously influential and enigmatic icon. 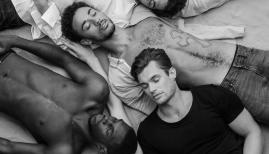