Be More Chill, The Other Palace Theatre review ★★★★★

New musical Be More Chill broke records for the most ticket sales in a week when it opened at Broadway's Lyceum Theatre - thanks mostly to an online community of young fans streaming the soundtrack and spreading the word.

And it’s clear many audience members at the West End transfer already know the songs. As the second most discussed musical on Tumblr (after Hamilton), with millions of views on Youtube, this is a show about teenagers that galvanises the snapchat/streaming/tiktok generation.

Following in the footsteps of gawky teen musical Dear Evan Hansen, Be More Chill tells the story of Jeremy (Scott Folan), an adolescent outcast negotiating high-school hierarchies and surging hormones. But there's a sci-fi twist, as this particular nerdy hero takes a pill that triggers a supercomputer inside his head. The technology is supposed to help him decode the formula for fitting in, but this device has world domination in its sights. 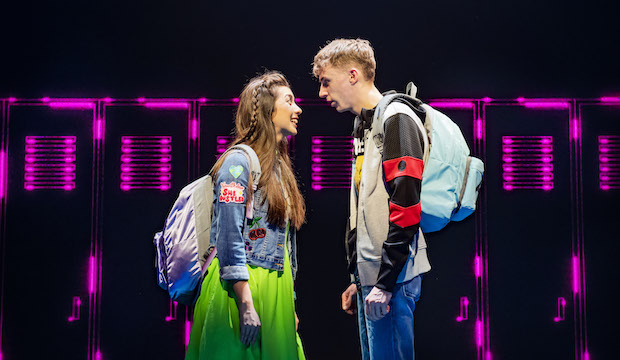 There’s lots of talent in the young cast but standout performances come from Miracle Chance as manic love interest Christine, Stewart Clarke as an icy cool villain and Blake Patrick Anderson as the loyal best friend and singer of show-stealing song Michael in the Bathroom.

You won’t leave feeling particularly enlightened, but you’ll certainly be entertained and uplifted. It’s the songs that hold all the fun and all the feels in this show. A combination of humor, tenderness and perniciously catchy hooks builds the viral appeal and leaves you wanting to track down the cast recording album on Spotify.

Tickets for Be More Chill at The Other Palace Theatre are now on sale. Click here to book.