Michelle Terry shows that Shakespeare can be woke with a gender-blind, race-blind, disability-blind company collaborating on Hamlet and As You Like It

Terry's tenure may initially look more traditional; she's turned away from the contemporary sound and lighting that ruffled feather and she's brought back the ruffs and doublets.

But her two opening two shows is subtly subversive. Produced and performed collaboratively by the newly formed Globe Ensemble, As You Like It and Hamlet are a vibrant example of that tradition need not be at odds with progress.

Described by Terry as 'gender-blind, race-blind and disability-blind', both shows take an inclusive approach to casting. As the same ensemble perform in both the comedy and the tragedy, the shows are presented as companion pieces. But they work just as well alone. 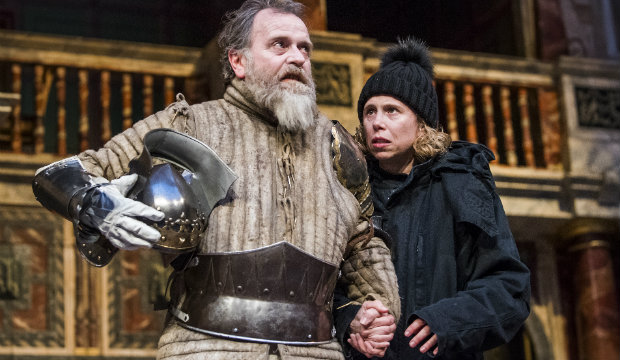 Colin Hurley as the Ghost and Michelle Terry as Hamlet. Photo by Tristam Kenton

The most refreshing thing about watching a diverse, gender-balanced cast is just right it feels; most of us are sensible enough to already know that Shakespeare's verse will still shine with significance whether Hamlet's played by a man or woman, but it's still a rare thrill to actually see equality in performance.

Deaf actor Nadia Nadarajah, who plays plucky sidekick Celia in As You Like It and one half of Rosencrantz and Guildenstern in Hamlet, brings a fresh comic energy to the text as she signs along. The interaction between speech and sign language are an expressive and engaging addition, which feels true to the physical theatre and clowning that has always been part of The Globe.

Though the commendable equality and inclusivity that shapes both shows is resounding success, the productions themselves sometimes feel flat. Performances across the board are impressive - especially Terry herself as Hamlet - but they rarely make use of the uniquely intimate Globe performance space.

It was always a challenge to follow on from the bombastic brightness and infectious energy for which Rice was renowned, but in these pared back productions we missed the audience interaction and immersion that has always been a hallmark of The Globe.