Majok’s text is a densely woven masterpiece. It stuffs complex themes into a simple plot, containing characters so well-rounded they could have just arrived from New Jersey’s snowy November streets.

The action jumps between the complex interactions of two individuals with disabilities and their carers: John and Jess, Ani and Eddie. Jack Hunter (All You Need is LSD) plays John, a wry Harvard man with cerebral palsy. He can afford part-time private care. This comes in the form of Jess, a penniless waitress working through the night to make ends meet, forcefully portrayed by Emily Barber.

John’s wealth shelters him from a hostile world; Jess is left exposed to the rain and snow that pours down during Hall’s smooth scene changes. Barber gives Jess the appearance of a starved animal, hardened by exploitation and struggle, weary of opening up to her male employer, but dependent on the paycheck. 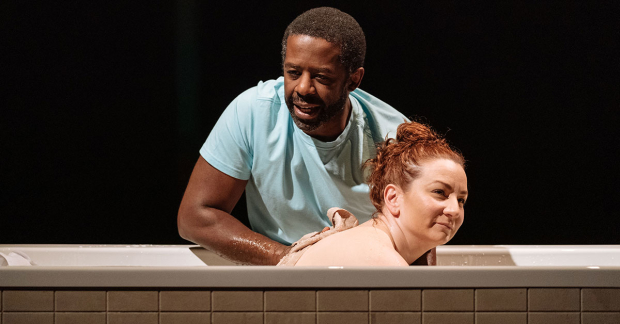 Intriguingly, although John and Ani are both in wheelchairs, their mobility is ultimately dictated by their finances. John is endowed with the freedom of money, able to study and go on dates at will, confidently saying ‘I can do anything I want, except the things I can’t’.

But for Ani even going out in her condition is too expensive. So she is confined to her brown apartment with its greying curtains and cracked bathroom tiles. Despite Eddie’s attempts to cheer Ani up, his escapism cannot alleviate the bleak surroundings. Being poor, the show emphasises, can be a disability all of its own.

Mojak's writing challenges our obsession with labels. For her, judging an individual by whether they are rich or poor, man or woman, disabled or able-bodied, are obstacles to relationships. John widens the gap between himself and Jess by belittling her for her threadbare lifestyle, at odds with the prestigious Princeton brand on her CV.

But the characters are closest when they ignore divisions. Eddie’s jokes about Ani’s disability give common ground through a shared sense of humour. Although constantly insulting Eddie’s attempts at help, Ani’s radiant laughter at his tongue-in-cheek ‘don’t go away’ show a big heart still beats under her cloud of despair.

Jess finally retracts her claws when gossiping about boys whilst showering and dressing John. He is no longer a man or an employer, just a human being to share life with. The play’s silver lining is found in an innate desire to connect and to care.