A Day in the Death of Joe Egg, Trafalgar Studios review ★★★★★

Director Simon Evans brings a potent new production of Joe Egg to the Trafalgar Studios. Opening just weeks after the playwright’s death age 92, it’s a timely reminder of his formidable and forward-thinking talent.

The uneasy comedy is propelled by vibrant and nuanced performances from TV stars Toby Stephens (Lost in Space) and Claire Skinner (Outnumbered) as husband and wife Bri and Sheila.

Switching between surreal comedy and dark desperation, the play follows the couple’s struggles bringing up their daughter Josephine, aka Joe Egg, who was born with severe physical and mental disabilities. As the title suggests, we see just ‘A Day’ when 15-year-old Josephine (played by Storme Toolis, who has cerebral palsy) returns from daycare and suffers a series of fits. But the characters interject and interrupt to fill in back stories and personal narratives, so we gradually learn of Sheila and Bri’s rushed white wedding, the traumatic childbirth that came six months later, and the crushing yet confusing diagnostic process.

Nichols’s writing hinges on an awareness of the audience: we are addressed directly and told the kind of personal, unspeakable feelings that the characters would never tell each other. We learn how Sheila blames her own promiscuous past for her Josephine’s disability, and how she persists in searching for milestones and progress. We also hear how Bri resents his daughter and sees no hope or opportunity for her quality of life. 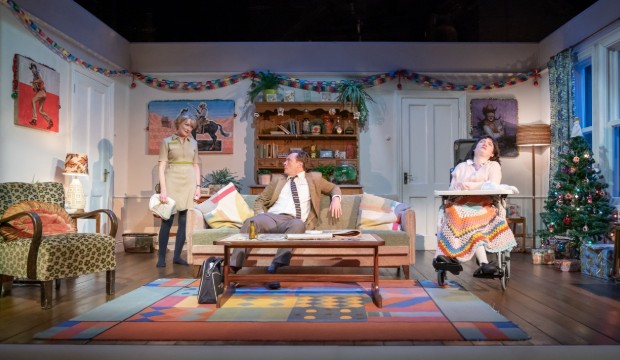 Claire Skinner, Toby Stephens and Storme Toolis in A Day in the Death of Joe Egg

It's bleak, but Toby Skinner is relentlessly funny as he anaesthetises his desperation with ribald jokes. He and Skinner spark as they create different personalities to give voice to their silent, unresponsive daughter. When well-meaning friends Pam and Freddie arrive, they voice the prejudice and challenges of the outside world, referring to Joe as ‘a lost cause’. Later Josephine's grandmother, played with wry comedy by Patricia Hodge, repeatedly remarks how lovely Joe would be ‘if she was running around’.

For all the humour, A Day in the Death of Joe Egg is inevitably, a sobering and devastating watch. But the honesty of Nichols’s writing and the sensitivity of Evans’s direction prevent the production from ever feeling mawkish, pitiful or emotionally exploitative. Instead this is a show that celebrates humanity and hope, without undermining or denying the insurmountable challenges of being a carer.

What is most remarkable is how it endures and feel so timeless. Apart from the 60s styling in Peter McKintosh’s intricate set and costume designs (which are basically back in fashion again), the story could have been written yesterday.