Rather than the standard foodie fare, expect a fresh perspective from a festival set up to share and celebrate the ideas, risks and struggles that feed creative succes.

Three top chefs: about the speakers

There will be tasty titbits and insights from Thomasina Miers, whose flair for flavours saw her crowned Masterchef winner in 2005. A few years later Miers revealed a business savvy to match her cookery skills when she launched Wahaca, which serves up zesty, fresh Mexican street food inspired by her travels. We're fascinated to hear how Miers juggles ths growing restaurant brand with creating new recipes for an impressive five cookbooks.

Australian chef Skye Gyngell trained in Sydney and Paris before giving London's Petersham Nurseries an elegant culinary makeover with a focus on seasonal ingredients that has since become her trademark and won her a Michelin star. But Gyngell's talents are not confined to the kitchen. She was food editor at Vogue, has published three best-selling books and last year opened Spring, a new restaurant at Somerset House. 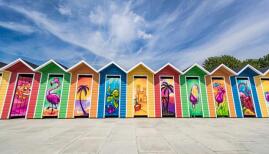 London water parks to seek out in the heat