Jonas Kaufmann stars in Beethoven's heroic opera, in the year that marks 250 years since the composer's birth. But it's soprano Lise Davidsen who excels

4 CW readers are interested
Fidelio, Royal Opera House review 4 Fidelio, Royal Opera House review Claudia Pritchard
The audience groaned or held its breath as Covent Garden’s director of opera, Oliver Mears, walked on stage. Bad news was surely coming for the full house expecting to hear the great German tenor Jonas Kaufmann in Beethoven’s Fidelio. Word had already got round that he had not sung at the dress rehearsal.

Don’t worry, Mears pleaded. Mr Kaufmann had been unwell for several days. But he was going to perform...

The pressure of expectation at a singer at this stage in his career is hard to overestimate. With notable successes scored and a higher profile than ever, there is a lot to live up to. So of course we would make allowances for that indisposition. In the event, when singing the role of Florestan it does no real harm to be a little under the weather. Entombed and half-starved, the political prisoner is fighting for his life as well as his revolutionary principles. In Fidelio the biggest sing goes to Florestan’s brave wife Leonore.

The opera even bore Leonore’s name at one stage in its long gestation, as do the several overtures that are known to concert-goers as standalone orchestral works. She assumes the name ‘Fidelio’ as she inveigles herself on to the prison staff, becomes a trusted worker, accidentally arouses the passion of the gaoler’s daughter, and effects Florestan’s escape. 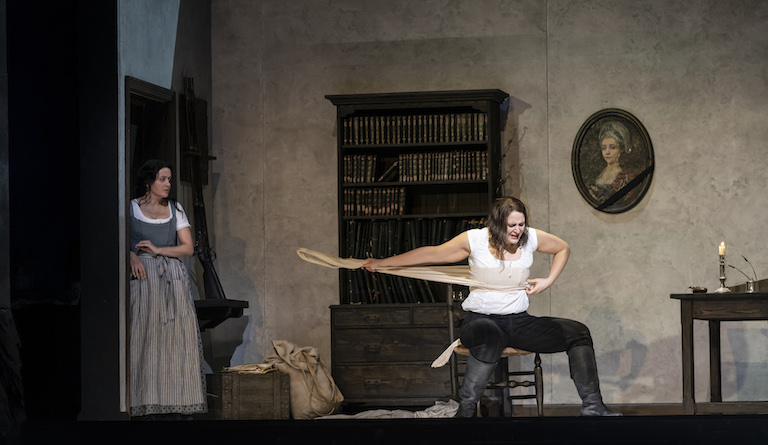 A new production for the Royal Opera House by German director Tobias Gratzer of Beethoven’s only opera opens in the France of the Revolution, which seethes with suspicion, fear and cruelty. But in the second and final act, the action is transposed to modern times. Florestan’s confinement is solitary, but is observed by scores of silent, besuited onlookers, some pinpointed in back projections, the men and women who see suffering and do not act. All of us, in short.

As Kaufmann’s Florestan fights for life in his dungeon, it is only when Leonore comes to the rescue and when the situation becomes even more dangerous for both that the suits react, firstly hiding between their own chairs, eventually taking sides. When one woman tries to give Florestan water, she is even held back by her neighbour.

Kratzer’s point is clear: we are apathetic in the face of injustice. Before the curtain rises, the audience has been mirrored as it takes its comfortable seats. We are all silent bystanders…

Despite the attention on Kaufmann, the show belongs to the Leonore of Norwegian soprano Lise Davidsen, whose rich, effortless sound and easy vocal athleticism (Beethoven is never easy on his singers) shine out of this production like the bright light into which the other prisoners finally stumble in Act One. A relatively new arrival on the opera scene, she seems capable of any vocal challenge, with an easy, logical line and sumptuous tone; depth of passion will come with the years. 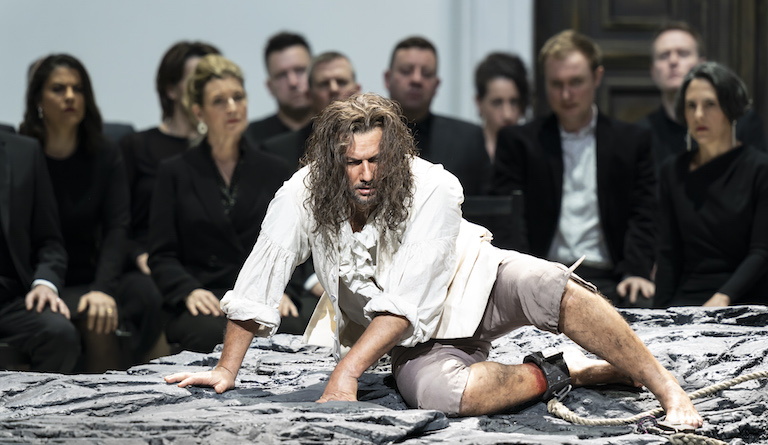 Other musical dates with Davidsen are in the pipeline beyond the run of this show; they are not to be missed.

Antonio Pappano conducts the Orchestra and Chorus of the Royal Opera House with the intelligence and integrity that he brings to every score. Beethoven was experimenting with opera as he went along: it opens with a Mozartian squabble between youngsters, grazes the soulful intensity of the late string quartets, rumbles in and out of orchestration on a symphonic scale, and from time to time prefigures Wagner. Pappano makes complete sense of this pot-pourri.

Amanda Forsythe is a sweet-voiced Marzelline, who in discovering the truth about Fidelio’s identity is crushed like her caged canary, snuffed out by vicious prison governor Don Pizarro, coldly sung by Simon Neal. Georg Zeppenfeld is the gaoler Rocco, vestiges of humanity conflicting with the need to stay in a job. Kaufmann has indeed sung better, but this only heightens Florestan's pain.

Rainer Sellmaier’s design and Michael Bauer’s lighting create scenes that could have been painted by Delacroix or Géricault, with impenetrable shadows and hard-to-decipher figures. There’s a real live horse… 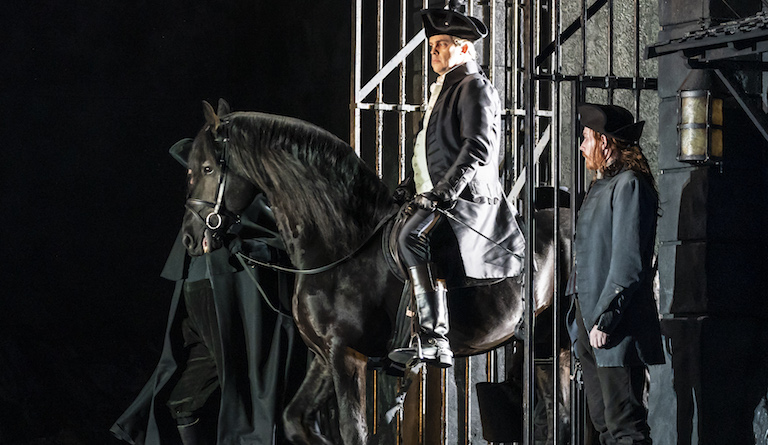 The painterly effect is emphasised by a frame of white light surrounds the whole box set. But that box pushes every singer upstage, which is hard on lighter voices. It is only when the whole cast steps through the fourth wall into our space that you can appreciate its full strength. The proscenium arch is already a boundary. Why do designers create a second one?

Nonetheless, this is a musically powerful and emotionally affecting production. As Nazanin Zaghari-Ratcliffe languishes in an Iranian prison, having gone without food and now clearly ill, you do not have to look far to see today a person who, like Florestan, suffers in plain sight.

Fidelio is sung in German with English surtitles. Further performances are on 3, 6, 9, 13, 17 March at 7:30PM. There are live cinema screenings across London and worldwide on 17 March: click here for details.