A complex tale of tyranny, lust and betrayal is simply told through music in a stylish new production

Radamisto review , English Touring Opera, Hackney Empire 4 Radamisto review , English Touring Opera, Hackney Empire Claudia Pritchard
Always a problem, that theatrical business of spouses or siblings not recognising each other in disguise, sometimes for scene after scene. So how characteristically insightful of Handel and his librettist, probably his regular collaborator, Italian all-rounder Nicola Haym, to have Zenobia spot her husband inside the messenger's outfit in the title role of Radamisto.

'That voice!' she whispers, at once. Well, of course. Never married himself, nor a father, Handel shows time and time again in his many operas an understanding of human relationships and family intuition at odds with his bachelor lifestyle in Brook Street, off Regent Street, during his long years in London.

It was at the then new Royal Academy of Music, an unconnected forerunner of today's institution, that Radamisto was first performed in 1720, with many revisions and productions to follow, dropping characters and recasting roles.

First time round Radamisto was a 'trouser role' for a soprano. Then the celebrity castrato Senesino took over. For English Touring Opera in its handsome production at Hackney Empire, the very experienced countertenor William Towers nips up and down this demanding part, at one point while also clambering along a craggy cliff-face. And during this climb Zenobia apparently flings herself to her death, to release both from the clutches of the tyrant Tiridate.

In this Tosca-like moment it is ETO regular Katie Bray who tumbles alarmingly from the precipice; happily her singing is sure-footed, colourful and nuanced, every scene stepping up a gear when she is on stage. As Tiridate baritone Grant Doyle hates Radamisto, desires Zenobia, and despises his own wife Polissena, the sister of Radamisto, sung by a dignified Ellie Laugherne. Doyle's fine voice was heard in The Skating Rink at Garsington this summer, and he will be in villanous mood again in Spring 2019, when he sings with ETO at Hackney the title role in Verdi's Macbeth (9 March). 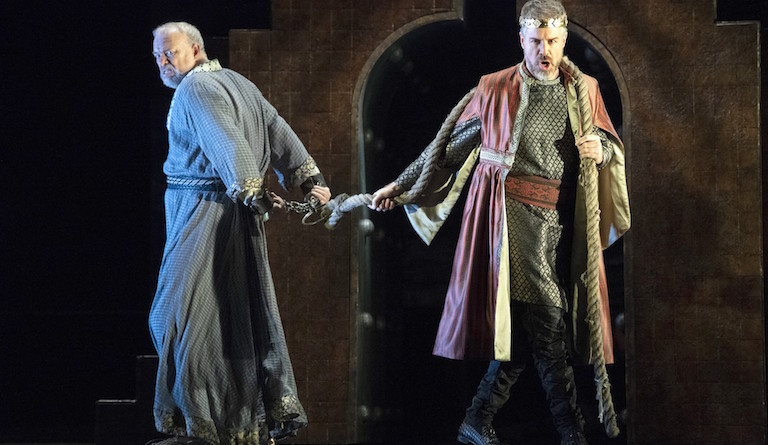 Bass Andrew Slater, as the siblings' tormented father, and John-Colyn Gyeantey as Tiridate's right-hand man, complete the cast of six. But the clever and stylish black-and-red design by Adam Wiltshire and lighting by Rory Beaton peoples the stage with the help of mirrors. Characters are literally and metaphorically reflective, often boxed in, as if by their limitations, or led to enlightenment by repeated candles or lamps.

ETO general director James Conway, directing one of three productions in the autumn Hackney residency, spots that Zenobia is really the star of the show – the opera was staged in Handel's native Germany with her name as the title – and in Katie Bray he has a heroine who is feisty and fearless. Still, Radamisto gets the showstopping aria 'Ombra cara', so he is not a complete letdown.

The Old Street Band gives a self-effacing performance under Peter Whelan. You may prefer your chromaticism shot through with more frisson – just think how the Orchestra of the Age of Enlightenment would shin up those sheer slopes – but you'll go a long way to hear such lovely bassoon work.

'Radamisto' is sung in Italian with English surtitles.
by Claudia Pritchard