As we witness the casual acquisition of a trusting young woman by a callow young American naval officer - and at 15 she is really only a girl - we know that what for him is merely a temporary arrangement, like renting their marital home, is for her the real thing, and therefore sure to end in misery.

As always with Puccini, an agonising human situation is portrayed in glorious melodies and sumptuous orchestral colours, but here is a production where the opera begins before a single note is sounded, a river of scarlet ebbing down the stage with its intimations of bloodshed to come, and a solitary dancer tracing long sweeping movements, like human calligraphy. Carolyn Choa's choreography weaves seamlessly in and out of the action throughout, the dancers often ghost-like in the shadows.

And how to suggest a bride so young, a bridegroom so juvenile, when Puccini's score calls for experienced voices? The American soprano Rena Harms and the British tenor David Butt Philip start out by suggesting fresh-faced inexperience - and neither has the sort of belting voice that jars oddly with a youthful presence. But they mature in their characters' three-year separation into a devoted mother and an upright citizen with well-meaning if misguided intentions to repair the damage done by deserting his Japanese bride. 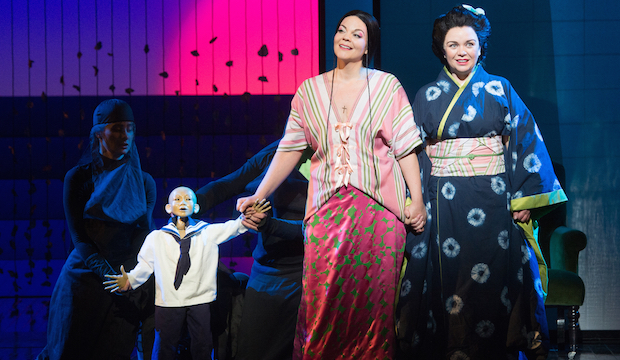 Minghella, with his great gift for effect, came up with a brilliant solution when it came to putting an expressive two-year-old on stage: he used the Japanese puppetry bunraku, three almost invisible adults making little Sorrow toddle and lurch in such a lifelike way that we never stop believing in the little boy. Blind Summit Theatre create this illusion with charm and pathos. (That Minghella himself died in 2008 and did not live to see his production become one of the long-running successes of English National Opera - and it is sure to be given many more outings - only adds to the evening's undertow of loss.)

The spectacular traditional costumes by Han Feng and atmospheric set by Michael Levine root us firmly in Nagasaki, but there is a universality about this Butterfly - seduction and betrayal crosses cultures. The English National Opera orchestra under Richard Armstrong pushes the drama inexorably to its tragic ending, but as so often at the Coliseum, it is the marvellous, benighted chorus (the singers' future is uncertain) that propels the performance up a level, the great gusts of sound as powerful as the many wonderful visual effects.

This Madam Butterfly is a modern classic, a success on so many levels. I saw the first performance more than a decade ago, and now I think it is better than ever.