Two stories from South African history. An orphaned boy makes his own way in a tough world, and a First World War disaster is turned into one last dance

Dancing the Death Drill tells the story of the SS Mendi, which sank off the Isle of Wight after a collision with a much larger ship, the SS Darro, on a foggy night in February 1917. Of the 823 souls on board, 646 were lost, the greatest maritime disaster to happen in British coastal waters. The young black South Africans were on their way to France to dig trenches and carry out other menial tasks; in the racist world of the British Empire, only white men were allowed to carry guns.

The Ensemble devised Dancing the Death Drill collectively during workshops and rehearsals, basing it on Fred Khumalo’s novel of the same name. They tell the story with great clarity, frequently moving seamlessly from speech to song.The multi-faceted cast act, sing and dance with a convincing intensity borne of their conviction in the importance of their tale.

They also provide the musical accompaniment themselves, playing mostly marimbas (wooden xylophones, sort of) but also empty plastic bottles and drums made from dustbins and oilcans covered with goatskin. Like the instruments, the few simple props are items which could be picked up in any township – shovels, sticks, pieces of cloth, bits of rope. The choral singing is once again glorious and the cast also use their voices to create a soundtrack of birdsong, wind, waves, foghorns and creaking shipboards.

One powerful image after another is created with the simplest of means, and one of the most haunting comes near the end. An inquiry has been set up to investigate the cause of the disaster and the Master of the SS Darro is being questioned.The actor playing the Master holds a piece of white corrugated iron on which the name of the SS Mendi has been painted in black letters. As he calmly explains why his ship sailed on without stopping to rescue the drowning men, he paints over the name with white paint, leaving behind only a ghostly image. The final verdict of the enquiry is breathtaking.

At the end, the cast do indeed dance the 'death drill', portraying the final moments of the crew as a dance of frenzied energy and explosive rage, bare feet slapping the stage, every slap demanding remembrance for the young men of the SS Mendi. 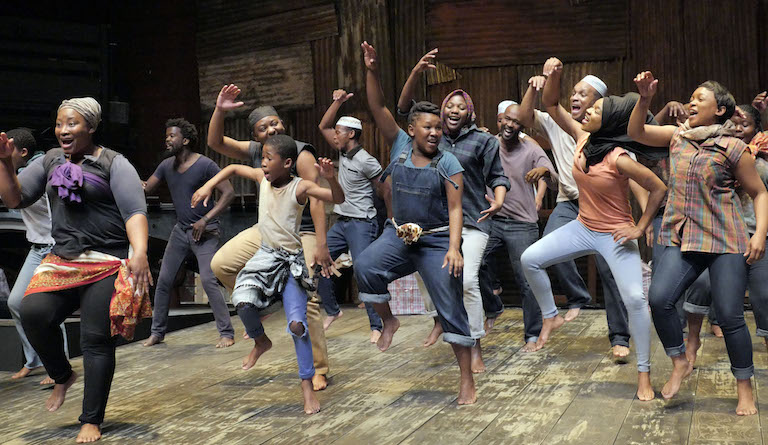 A Man of Good Hope is performed by Isango Ensemble. Photo: Keith Pattison

Also in this repertory season is A Man of Good Hope (17 April to 4 May, nine performances), based the true story of eight-year-old Asad, a Somalian refugee whose mother was murdered in front of him. With a good head for business he sets out from is adopted home of Ethiopia for South Africa, but is shocked to find there xenophobic violence that threatens both the country and his plans.

A Man of Good Hope returns after a critically-acclaimed run at the Young Vic. These are the first London performances of SS Mendi: Dancing the Death Drill after a hugely successful UK premiere at Nuffield Southampton Theatres, as part of the 14–18 NOW WW1 Centenary Art Commissions. Go to one or both – but go.