From a castle perched on the edge of the sea to a gothic temple surrounded by a world-famous landscape garden, here's where to holiday in style in the UK 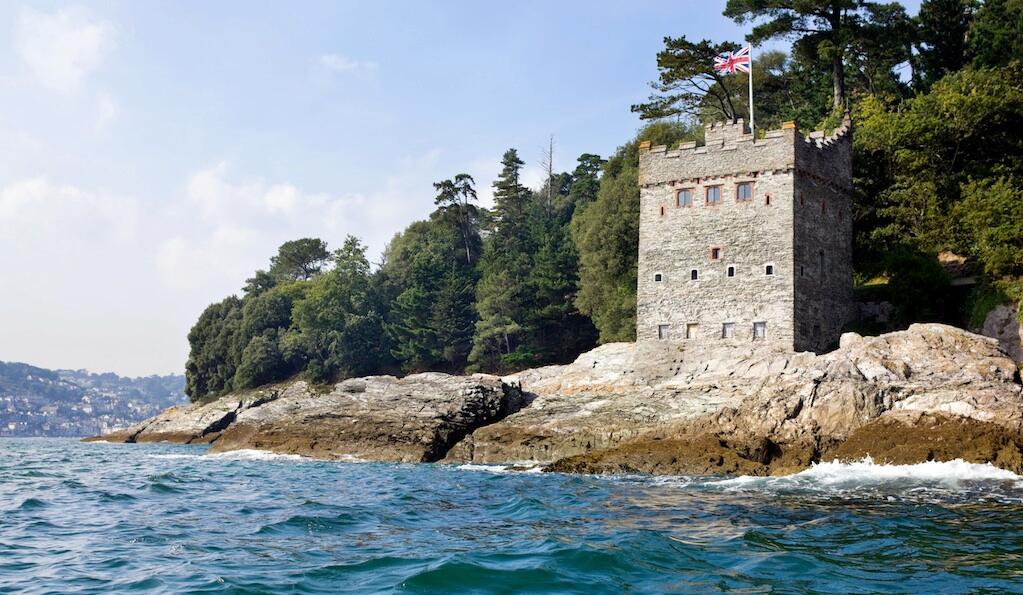 Stunning UK landmarks for overnight stays
Thanks to its rich and cultured history, the UK is not in short supply of period properties, many of which reflect the grandeur of past times. What you might not know, though, is that the Landmark Trust has renovated over 200 of these properties, which were left derelict or uninhabited following their heyday. The trust’s collection of self-catered holiday accommodation includes all sorts of luxury lodges, from holiday cottages to castles and follies. What’s more, almost all the properties allow guests to bring their dogs.

With UK holidays very much in vogue this summer, 2020 is officially the year to explore our shores and countryside, rediscovering its charms as you go. Whether you're celebrating a special occasion or simply looking for a base to enjoy some family time, staying somewhere truly remarkable will make your trip all the more memorable.

Here are some of the most impressive Landmark Trust you can stay in on your holiday. 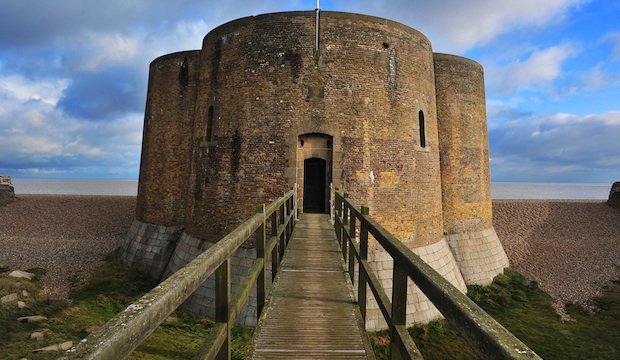 A stay in a Martello tower is ideal for those who are impressed by unusual buildings but like their lodgings down-to-earth and rustically charming. With its white brick walls, vintage signs and wooden furnishings, this Martello tower has been renovated in a way that ensures none of its authenticity is lost. Nearly a million bricks were used to build the gigantic, quatrefoil-shaped structure of the tower, which was originally commissioned for the far more serious purpose of keeping Napoleon out. 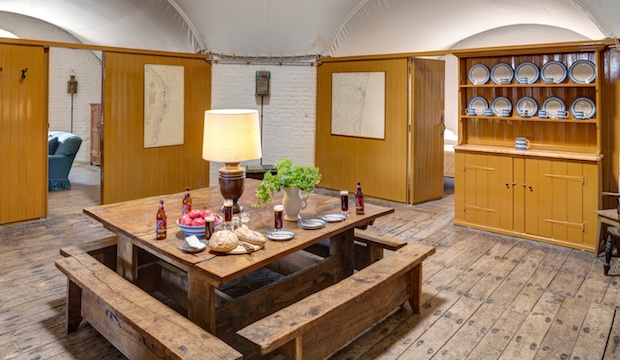 It's positioned at the foot of the Orford Ness peninsula, straddling both the River Alde and the sea, with the town of Aldeburgh a short distance. Guests can enjoy the often dramatic elements, knowing they’re safe in one of the sturdiest structures around. The large, lofty communal spaces mean you’ll never feel on top of one another, while the bedrooms – which are screened rather than walled off from the living area – mean you won’t feel too cut off from your fellow guests while you sleep. If the weather’s good, be sure to enjoy some fish and chips, and a pint of local brew on the roof of the tower, while watching the boats glide past.

The Banqueting House, Newcastle upon Tyne 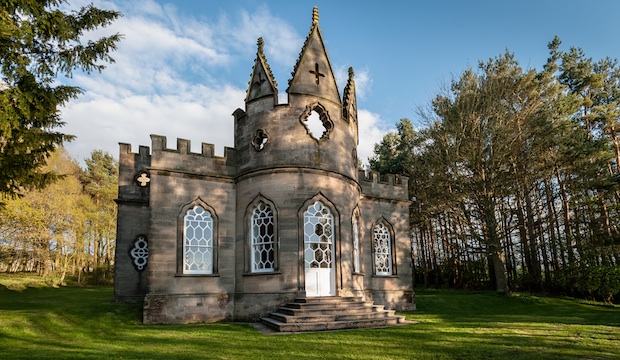 Fancy a stay in a secluded 18th-century Gothic folly? The Banqueting House on the Gibside Estate in Newcastle upon Tyne offers just that. The property was commissioned by Gibside owner George Bowes in the 1700s and was designed to be both looked at and out from. 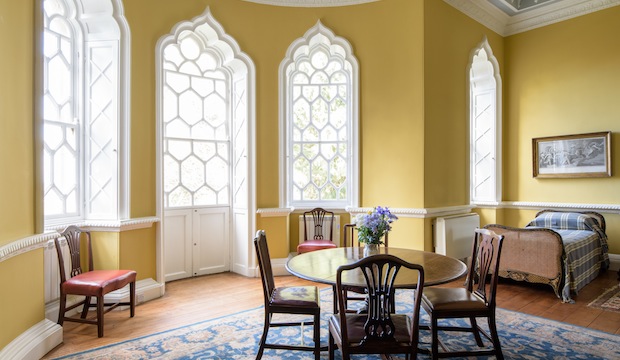 Enjoy feeling like the king or queen of the castle (or if you're easily spooked, the unwitting hero of a gothic horror movie) while inside its walls, and enjoy a picnic on the sprawling lawns in front of the property, as guests would have done back in the 18th century. Parlour games, anyone? 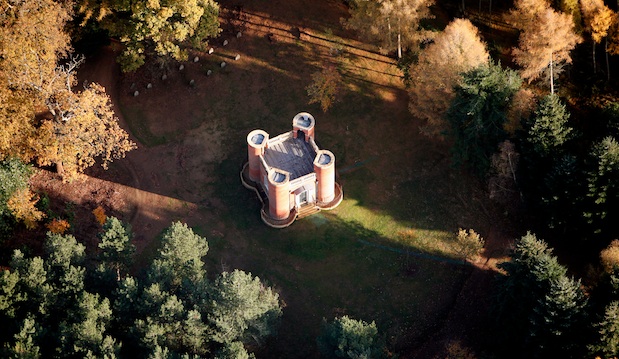 Queen Anne’s Summer House is like a location in a fairytale: the four-pillared property looks like a miniature castle and is entirely surrounded by woodland. This folly is thought to date back to the 1700s, and historians believe it was built after Queen Anne knighted Samuel Ongley, who owned the estate at Old Warden, and used it as a pavilion and summerhouse during the estate’s golden years. 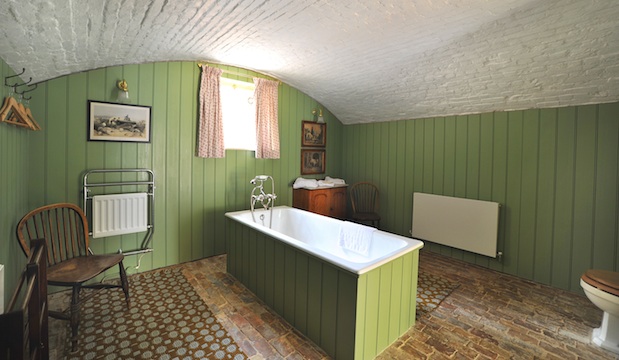 There’s a lot to love about the Summer House’s interiors, from the vast, regal bedroom with its floor-to-ceiling windows to the stone spiral staircase leading down to the property’s star turn: a stylish green-painted bathroom with brick flooring and a standalone bath as the centrepiece. The minimalist kitchen – a cross between Scandi-chic and rural country in its appearance – is fitted with all the appliances needed to make home-cooking an easy option. Don’t miss out on spending some quality solitary time on the rooftop, from where you can look out at the woodland which stretches in all directions. 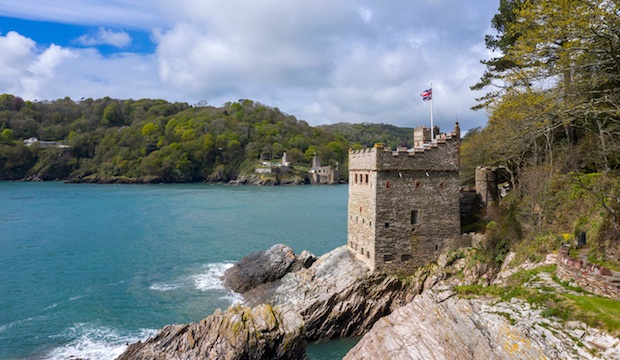 Perched on craggy rocks with the mouth of the river Dart lapping at the walls, Kingswear Castle has reassuringly thick walls, low ceilings and tiny windows which make it feel snug and sturdy. It’s also a stone’s throw from the towns of Kingswear and Dartmouth (on opposite sides of the Dart), meaning guests lack nothing by way of amenities. 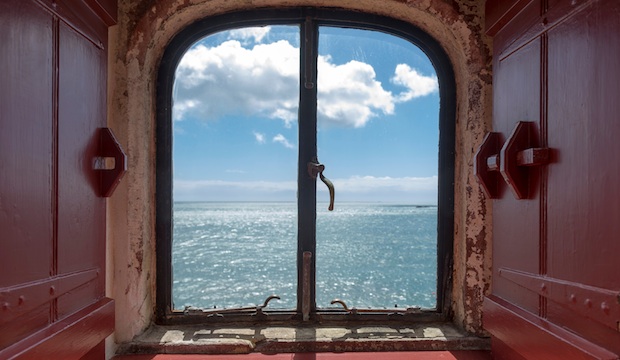 The castle was completed in 1502 and fitted with guns in order to protect nearby Dartmouth – a short boat ride across the river. From the rooftop – a sun terrace complete with deckchairs – guests can enjoy the novelty of raising and lowering the Union Jack (fitted in a bid to restore the castle authentically). This vantage point is also the best place to enjoy calming views of the water and boats passing along the river. 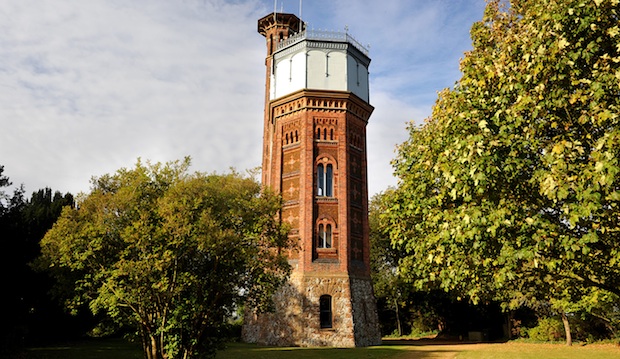 Back in the late 1800s, Appleton Water Tower was where the royal family entertained guests for shooting parties or picnics while in Norfolk. The tower was built as a solution to the unsanitary water supplies in Sandringham, which nearly led to the death of Edward Prince of Wales when he contracted typhoid. It's said that the young royals helped lay the foundation blocks of the tower. 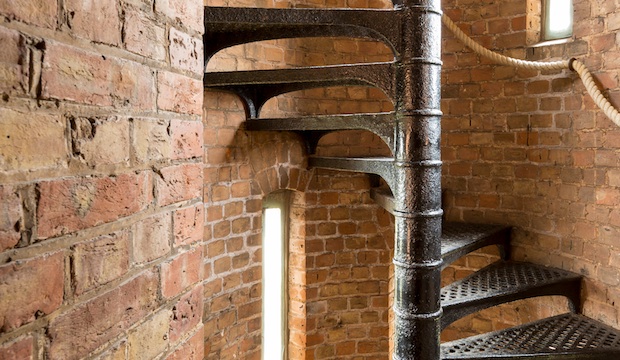 Back then the 32,000-gallon cast-iron tank that tops the 60-foot tower delivered the water pressure required, and now the upper levels provide breathtaking views of the Norfolk landscape, which guests can enjoy today much like the royals did in Victorian times. 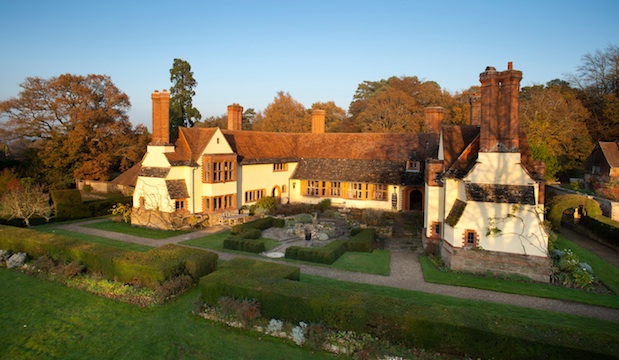 If you’re planning a getaway with a large group and long to stay in period lodgings, try Goddards in Surrey. Built by Edwin Lutyens between 1898 and 1900, the property was one of the first to be designed in what is now considered ‘traditional Surrey style’. Embellished throughout with mock Tudor beams, Goddards boasts not one but several reception rooms, large bedrooms, a banquet hall and even a skittles alley – a restoration of the property’s original bowling alley. 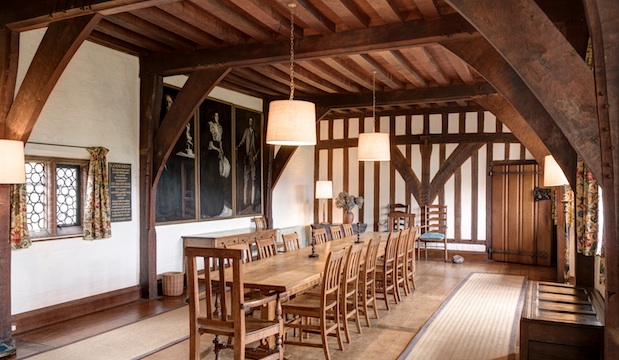 In the courtyard garden outside, take one of the many paths and get lost in the gardens which surround the house, enjoying the natural splendour whichever way you look. A bonus? You can get a Waitrose home delivery to Goddards, so you can enjoy a self-catered stay and make the most of the grand banquet hall. 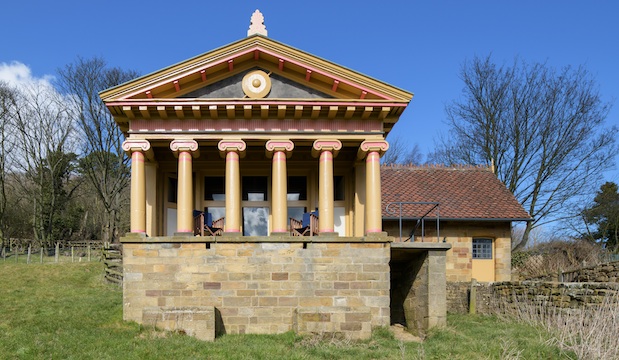 A former pigsty doesn't sound like a desirable residence but this conversion is a classical stone building fronted by Greek-inspired pillars. The eccentric-looking, single-storey landmark boasts vistas of tumbling fields and hedgerows rolling down towards the sea at Robin Hood’s Bay.

The Pigsty was commissioned by Squire Barry of Fyling Hall, who was said to have been inspired by the architecture he saw on his travels in the Mediterranean in the 1880s. Instead of turning his own home into a faux Greek temple though, he bestowed the wow-factor look on his pigs’ lodgings. Today, the Pigsty makes a cosy place to stay with its wood-burning stove and plenty of books. From here, excursions can easily be made to the nearby seaside town of Whitby and the North Yorkshire Moors. 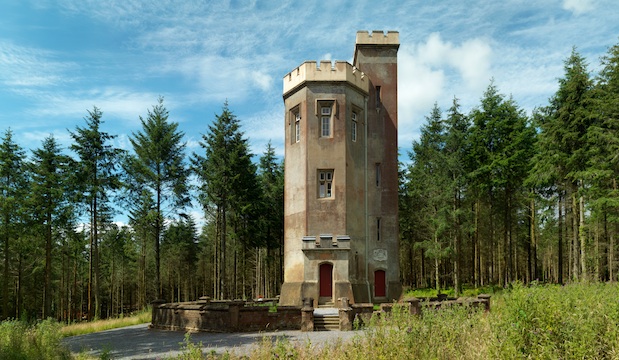 The China Tower on the Rolle Estate near Sidmouth, Devon, is a 19th-century Gothic tower boasting some of the most eccentric interiors you’ll find on this list. Formerly the property of Devon aristocrats the Rolles family, this octagonal tower is kitted out with a blue-walled, purple-furnished living room, and an elegant spiral staircase leading up to both of its octagonal bedrooms. 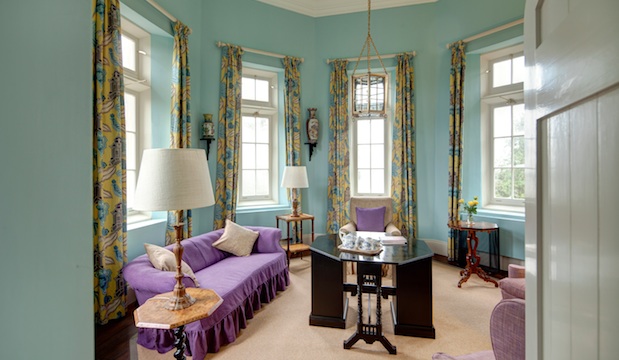 The tower was bought by Lady Rolle, who named it in honour of the rich collection of china she kept on display there. Today, the pared-back kitchen still has a collection of chinaware on show (albeit a minimal one). Make your tea down here, then take it up to enjoy on the tower’s own private roof terrace. 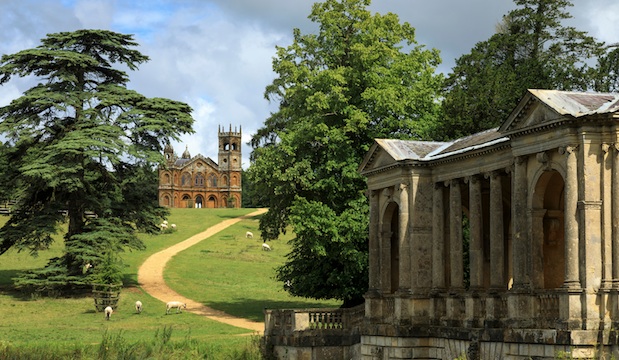 Set in one of the world's most famous landscape gardens, the Gothic Temple at Stowe offers a chance to live out your childhood dreams of being a princess in a castle. The temple was built in 1741 as a place of residence for Lord Cobham. From its gothic windows, guests can peer out onto the lakes and vast expanse of greenery, while a panoramic view can be enjoyed from the roof terrace. 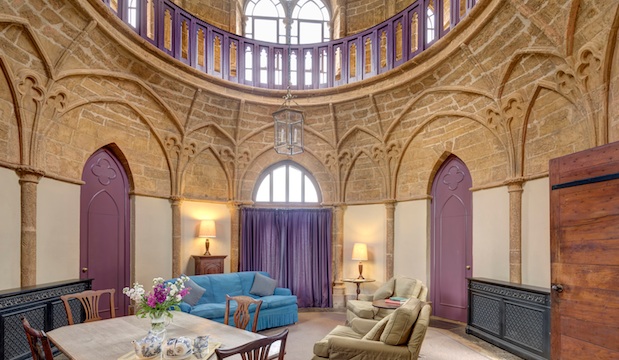 Inside the temple, the circular rooms frame the central space, a stone-walled living room with bright purple furnishings, from where you can gaze up at the spectacular mosaic-studded ceiling dome. A spiral staircase leads up to the turrets which have been converted into bedrooms, and the bathroom, where you can lounge in true style in the freestanding bathtub. 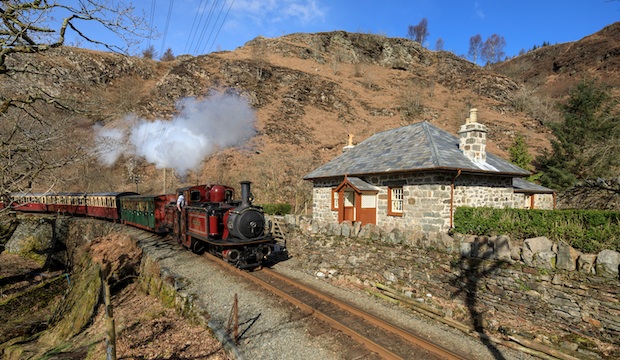 Enjoy a lineside view with a stay at Coed y Bleiddiau railway cottage in Wales, set low into the mountain slope of Snowdonia National Park. Coed y Bleiddiau (meaning ‘wood of the wolves’) was built in 1863 for the railway Superintendent, T Henry Hovenden. The cottage was used as an intermediate stop for trains transporting Welsh slate. Today, not only do the lodgings provide a front-row seat for watching steam trains chuff past, if you time it right, you can arrive on one too, alighting at the cottage’s own private platform. 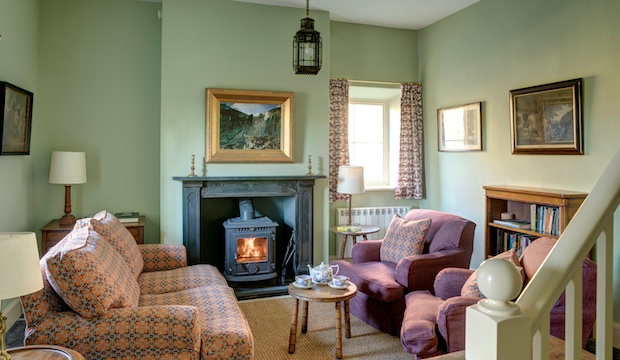 Once settled, there’s plenty to explore nearby, including walks though the National Park and birdwatching. More of a home bird? Hunker down in the cottage's cosy surroundings and muse on its history as the former holiday home of the composer Sir Granville Bantock and later the Arabist Harry St John ‘Jack’ Philby.