All the features are there. There’s a wicked witch played to perfection by Hackney regular Sharon D Clarke, a princess with a voice that would light up the Wembley Stadium let alone Hackney Empire in Alexia Khadime (most famous as Elphaba in Wicked), an oh-so-camp nanny played by Guys and Dolls’ Gavin Spokes, a pair of lovable sidekicks and, of course, the dashing Prince Gabriel. 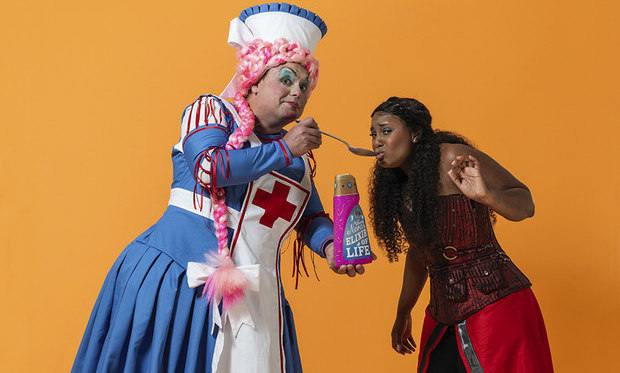 As is typical in most pantomimes, the first Act introduces our characters, but it’s the second which everyone waits for. After the adults, who made up the majority of the audience, have had another tipple, the music ramps up, the set doubles in garishness and audience participation is hitched up a scale or five.

The appearance of a giant goblin-come-troll figure, a giant dragon with bright red eyes and a moving neon jungle proved set spectaculars, and since the grown-up jokes will have rolled over their heads, it's these features which will stun and mystify the little ones. 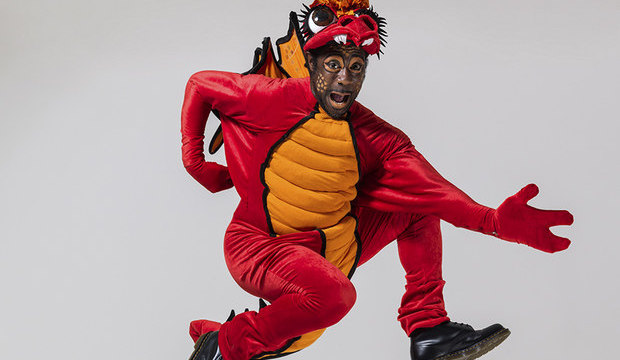 Kat B as Denzil the Dragon

But whilst most pantomimes are comprised mainly of a smorgasbord of Carry On jokes which makes us question how this form of entertainment has even survived, the Hackney Empire’s Sleeping Beauty offers something a little different.

Set against the rivalry of a medieval Britain with borders drawn high between ‘Westminsteria’ and ‘Hackneytonia’, Brexit and the fear of the Other hasn’t been forgotten. We are reminded that only in embracing difference, in this case the ‘Magicals’, can we overcome our evils. There are a few invasive references to Brexit and Donald Trump, which might have the potential to raise a few eyebrows if the show wasn’t playing to a London audience, and if they didn't do it so well.

Yet what’s so refreshing about the Empire’s production of the classic fairytale is it’s fresh perspective. Our Princess Tahlia (nee Aurora) is not a damsel in distress but wishes instead to drop ‘the Beautiful’ from her title and prove herself as a worthy ruler. Rather than being rescued by fair and gallant prince, it is she who rescues him from the clutches of the evil witch, in an example of gender role-reversal which has been a motif of this year’s hottest stage productions.

All in all, this is a production that the adults will find just as entertaining, if not more, than the children. The songs are set to familiar tunes, the dance moves are outlandish, the jokes are outrageous, the costumes are baffling and the Hackney Empire’s winning duo Susie McKenna and Steve Edis have once again pulled out all the stops to create a family-friendly, if tongue-in-cheek, Christmas Panto.