Action, atmosphere and an elephant puppet balance a sad, slightly heavy-handed story of survival: Running Wild returns to London in March 2017 for its UK tour

But this Open Air Theatre stage adaption of Michael Morpurgo’s novel balances the bleaker plot points with remarkable staging, puppetry so vivid it puts CGI to shame and flashes of silly fart humour that trigger the giggles.

Set against backdrop of the 2004 Tsunami and the violent poaching and palm oil industry, the book is Morpurgo at his most lachrymose. Seriously: if you thought War Horse was sad, brace yourself (and sensitive children) for a dead soldier dad, a lost mother and a baby orang-utan shot at close range.

In our show the main character Will was actually Lilly (Lil), played with plenty of spirit by young Ava Potter. The role is shared, on rotation, with Joshua Fernandes and Tyler Osbourne.

She (or he, depending on which night you see the show) is the epitome of pluckiness in the face of adversity. She and her mother travel to Sumatra for a fresh perspective, but nature has more tragedy in story, and Lil finds herself deep in the jungle with only an elephant as her guide. 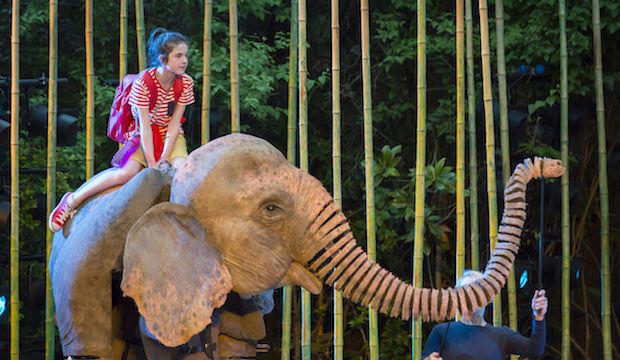 A circular rotating stage, an ensemble of young actors creating live sound effects and simple sheaths of blue silk bring the landscape to vivid life. Even shivering under a decidedly grey, slightly rainy English sky, you can feel the beach, sea and jungle. At the show’s dramatic highlight a menacing fire fills a red stage with smoke.

With a regular references to Rudyard Kipling and a mega-budget live action remake of The Jungle Book in cinemas, it's easy to see parallels. But instead of CGI technology, this production uses tradition and imagination to evoke the wild animals.

Most magical of all is Oona the heroic elephant. Manned by a team of four, including War Horse and The Lorax stage puppeteer Laura Cubitt, the creature is enchantingly lifelike, charging across the stage and through the gangway with little Lil perched atop.

The action and atmosphere are staged with aplomb. But the dialogue and plot can be heavy-handed. This is not a story about talking animals; much of Morpurgo’s book is description and interior monologue and it doesn’t completely work as performed dialogue. The intensity of Lil's plight is weakened as she must voice it aloud.

Similarly, while the environmental message is just the sort of thing we should be teaching children, grown ups may well find the preachy moralising lacks some subtlety.

Unlike last year's delightful Peter Pan, this family Open Air show doesn't have the narrative depth on stage to satisfy adult scrutiny. But it's not short of wondrous spectacle or worthy intentions.