There’s nothing new here, that much is obvious. It’s a Tim Burton film about pale, paranormal weirdos (seen it). It’s the origin story of a team of superheroes and the first movie in a possible franchise (sounds familiar). It’s the adaptation of a ‘young adult’ novel about a moody adolescent who turns out to be special (heard it before). It’s hard to look at the poster for Miss Peregrine’s School for Peculiar Children without feeling tired in your cynical old bones.

Tim Burton seems to feel the same way. It’s not like he holds the source material – the novel by Ransom Riggs – in high esteem. You get the sense that Burton considers the tale of magical ‘Ymbrynes’ and ‘Hollowgasts’ to be a load of old blarney (not for him the finicky reverence of cinematic universe-building). His version of Miss Peregrine is terribly cavalier with its consistency and internal logic. It papers over its own plot holes indifferently.

None of which sounds very promising. And Miss Peregrine doesn’t exactly start with a bang. But after a so-so first act, something wonderful happens: the film picks up steam and Burton ends up piling set-piece upon wonderful set-piece. By the climax he has you making various gleeful exclamations into a cinema full of people making similar exclamations. This is what The BFG should have been.

The details of the plot are no more important to the fun than in a Raymond Chandler novel, but you have to give them credit for getting Burton where he needed to go. Young Florida-native Jake (Asa Butterworth) travels to a small Welsh island to follow up a mad-sounding story told to him by his late grandfather (Terrance Stamp); there he comes across the titular Home, the eponymous Miss Peregrine (Eva Green), and her orphaned ‘Peculiars’. Hidden from the outside world, these children each possess a unique ability, ranging from the standard (invisibility) to the lame (power to grow giant vegetables) to the frankly Burton-esque (we won’t spoil it). 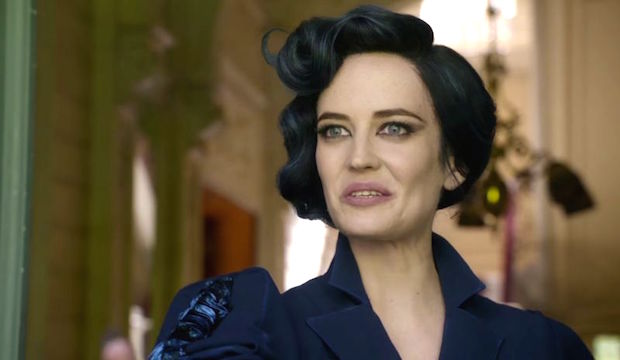 This brood is under threat from evil forces, for which we should be thankful. It’s the introduction of the baddies that gives the film a sense of fun and danger. Samuel L. Jackson is infectiously amused by his cackling moustache-twirling role, but his character’s fellow monsters – eyeless, quadrupedal mannequins with shark teeth and tentacle tongues – are genuinely unsettling, and probably too frightening for smaller children (these creatures eat people’s eyeballs – don’t say we didn’t warn you).

Whatever their charms, Tim Burton’s early films were always a bit saccharine as well as ‘dark’, although they’re infinitely preferable to his later CGI-bloated monstrosities. Miss Peregrine’s Home for Peculiar Children doesn’t just avoid these characteristics; it more or less inverts them. Its special effects are relatively restrained, and although it’s rigorously unsentimental compared to most children’s films (and most Burton films), the tone throughout is spirited and almost wholesome.

The secret ingredient – the thing that sets Miss Peregrine apart from similar Burton films – is the absence of long-term collaborator Johnny Depp. If this is the beginning of an actor-director hiatus, may it be a long one.