Double the fun: this raucous romp is one for kids, adults and fans of a rude joke or two

Double Double Act, created by Made in China in collaboration with the Unicorn Theatre, is a raucous romp involving jelly-slinging, birthday-cake-throwing, and buckets of green slime – already enough to charm the heart of any six-year-old.

Caitlin Finlay and Caspian Tarafdar (and, on alternating nights, Seb Booth and Nayana Crowe) star as tiny doppelgangers of their adult counterparts (Jessica Latowicki and Christopher Brett Bailey). The eponymous double double act occurs when these two pairs of performers – with identical chartreuse dinner jackets and one-liners – literally run into each other on stage. Both acts are at a loss: whose stage is it anyway? A battle of wits, slime, magic potions and a skilfully wielded pan ensues as each pair tries to outperform the other. 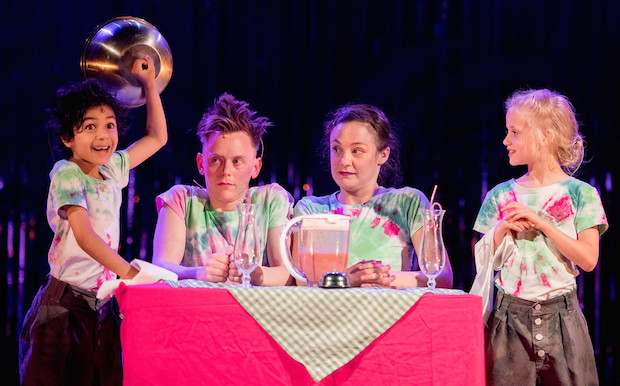 One thing is certain: both acts know how to work a crowd. The play’s opening scenes featured some rapid-fire wordplay and tongue-twisters by ‘Jess and Chris’, with a generous amount of bodily humour, to the cacophonous delight of a school group near the front row.

Caitlin and Caspian charmed parents and children alike with their insouciance and effortless ad-libbing, securing many fans as they darted into the rows to dispense high-fives. Dramaturg Dominique Collet clearly knows that kids are always the best at audience participation: the surprise of Chris’s request for ‘a round of applause if you like bedtime’ being greeted with unexpected cheers only added to the comedy. Double Double Act has a genuinely interactive element that evidently demystified the whole thing to younger audience members, and gives it an instant appeal.

Emma Bailey’s high-concept multicolour set is another highlight. Numerous small jokes emerged as the play progressed: delightfully, each of the footlights had visible toes, while a phone receiver dangling from the ceiling was yanked absent-mindedly to draw up a partition, revealing more elaborate set-pieces. Bailey incorporates slapstick into the set itself: in a moment straight out of a Terry Gilliam animation, a six-foot-tall fist on wheels barged out of the wings to knock Jess over mid-joke. In its innovative staging, Double Double Act is a triumph.

Where the play is weakest is in its attempts to play to children and adults simultaneously. A few ill-conceived jokes were delivered early on by the adult pair, missing the mark with gratuitous subtexts intended to appeal to parents. Similarly, moments that had the potential to be instructive for kids – the insight that girls and boys could do all the same things, for example – had no traction, touched upon only very briefly and never as part of the play’s wider plot. Fundamentally, the best parts of Double Double Act – the winning charm of its pint-sized performers, the simple and universal appeal of a few well-placed rude jokes, and its excellent set – would have been more than sufficient to entertain an audience without these scattergun attempts. 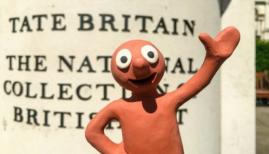 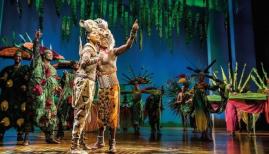 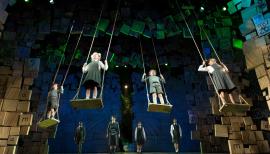 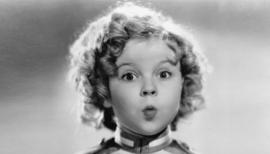