The Lyric Hammersmith's favourite choice for Panto season, Aladdin, returns to the stage for Christmas 2016 season with 24-carat magic

First off, forget the Aladdin musical at the Prince Edward. The Lyric Hammersmith doesn't have an exacting Disney specification to stick to -- in fact, Widow Twanky doesn't even stick to the script. The Lyric's production of Aladdin is rip-roaring fun: political, rambunctious and current, with all the traditional trimmings. Everyone will have a brilliant time.

Aladdin is a favourite pantomime for the Lyric- and with good reason. Joel Horwood’s script is an excellent vehicle for poking a big old hole in the establishment with a few carefully-aimed jabs. So alongside traditional gags we get references to Trump and Princess Jasmine (Allyson Ava-Brown) wondering what it's like to be ‘a poor’. Emperor One Per Cent lives in Peckingham palace, a zero-poverty zone.

Lovely hand drawn backdrops and brightly coloured sets conjure up the fictional borough of Fulhamboosh. Its market and chaotic launderette are framed with razzle-dazzle lighting and the cave of wonders has inflatable gold palm trees and Pokéballs. The houses are made from large council bins and Widow Twanky wears a dress made from plastic bags. The chorus are colourful, ramshackle and energetic.

There’s plenty to laugh at- Aladdin’s lovable brother Wishy Washy (Arthur McBain) mishears ‘magic carpet’ as ‘magic armpit’, the baddie, brilliantly played by Vikkie Stone, gets more and more enjoyable to watch, ramping up power-hungry Abanazer’s manic evil in every scene. She cringes, creeps, gabbles and gets amusingly furious when everyone forgets her name. 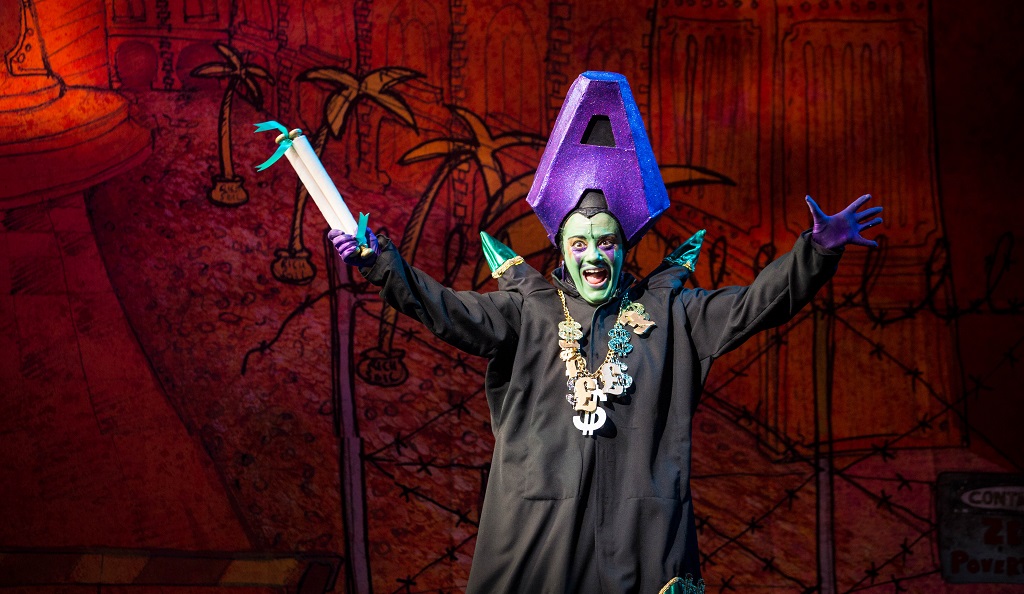 The pantomime dame, love or hate the concept, is a role that’s filled out by James Doherty in a series of fabulous outfits. There’s a slapstick police chase around the launderette which falls a little flat but our Dame Doherty grows on us: by the end we’re all signing along together.

This might be an old story, and one that the Lyric has used before, but it feels right on the pulse. The hits have been skimmed from Capital FM radio. Justine Timberlake’s Can’t Stop The Feeling! features heavily ('Got this feeling in my body' becomes 'Hammersmith-mas, Everybody'). There are thoroughly current references to everything from Article 50- a labelled undergarment in the laundry- to Mr Trump. But you’ll be charmed by old favourites too- singalongs, dance-alongs, a whole lot of shouted-out instructions.

The Lyric’s production has got a lot of heart. So much so that the special effects are completely unexpected- a show with this much spirit doesn’t really need them- but they include some slick outfit changes on stage from the Emperor and Aladdin. The stage trickery that makes the magic carpet fly is almost out of place in such a down-to-earth show.