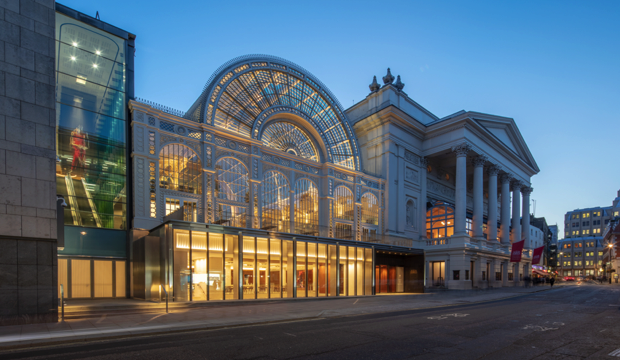 Royal Opera House Exterior (c) ROH photo Luke Hayes
‘Excellence IS accessible’ said Oliver Mears, Director of Opera at the Royal Opera House (ROH) at the official unveiling of the transformed building following a three-year construction project. That, in a nutshell, is the ROH’s mission statement; openness and inclusivity are exactly what the new public spaces in this august opera house are designed to achieve.

The idea is that as from 10 am on Thursday, 20 September, anybody can just pop in – no ticket required – and have a coffee, a meal, a drink, a wander through the new foyers and terraces, catch a free lunchtime performance, and take part in all manner of informal activities.

ROH - THE NEW LOOK
Looking on from Bow Street, the new box-like entrance beneath the glamorous Floral Hall is rather unprepossessing, its narrow glass panes contained by heavy metal frames; but as you go through the doors you enter another world, one of dazzling, spacious open areas, bathed in natural light. 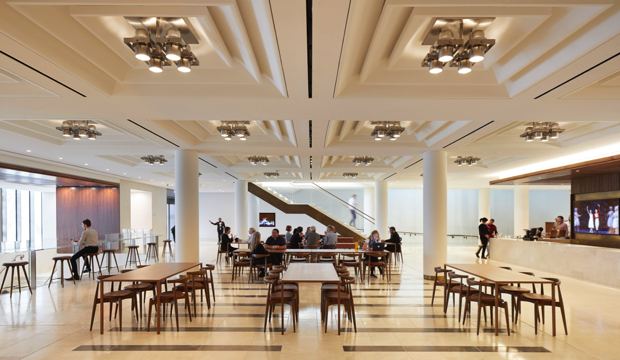 The task of turning the building into ‘your ROH’ was entrusted to the architectural/design partnership Stanton Williams, which has built a reputation for expertise in ‘releasing the latent potential in existing buildings.'

So they were tasked by the ROH to see, as partner Alan Stanton told Culture Whisper, ‘how the spaces inside the building could be liberated, how they could become flexible spaces for informal events and also, how – importantly! – we could get the building to be open all day.’

ROH – THE LINBURY THEATRE
Central to the £50.7 million project, the funds for which were entirely raised from philanthropy, was the redevelopment of the Linbury Theatre, formerly a serviceable but slightly dingy underground auditorium.

The new 406-seat Linbury Theatre is quite an achievement. 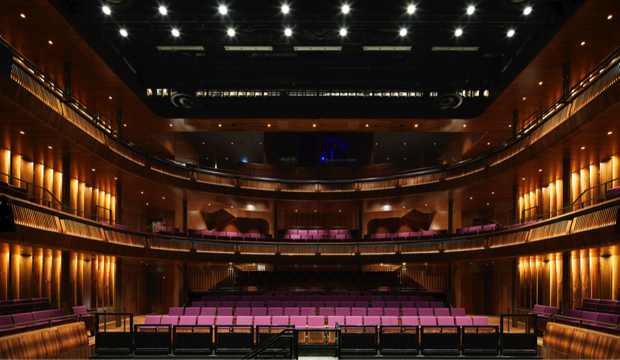 ROH LInbury Theatre (c) Hufton & Crow 2018
The Linbury Theatre is small enough to provide an intimate experience and yet sufficiently adaptable to receive a full programme of dance and opera, which will complement and extend the work performed on the main stage. Ticket prices range between £5 and £45.

Its first season opens in December; and Kevin O’Hare, Director of the Royal Ballet, told us he was excited at the prospects it opened for his own company.

‘I’m thrilled by it. I think it’s exactly what we need at this time, I think we’ve been building up to it in the way we’ve programmed. To have this beautiful and intimate space to perform and to create new work, to build young choreographers within the company, and also outside, is very exciting.’

ROH - 'ELITIST? NO!'
Much of the ROH’s public relations work over the past few years has concentrated on dispelling the notion that the House, with its central fare of opera and ballet, is ‘elitist’ – i.e., meant for the chosen few… As Chief Executive Alex Beard never tires of stressing: ‘elite, yes, in the sense that our performers are among the best in the world; elitist NO.’

It’s important for the ROH that the many informal activities in the new open spaces should be as inclusive as possible, and that, in the words of Jillian Barker, Director of Learning and Participation, they ‘give people the chance to discover… the chance to be creative themselves.’

There will be a full programme of festivals, family Sundays, Tea Dances, workshops and informal recitals; and come the Christmas season, the House will transform into The Nutcracker’s Kingdom of Sweets – surely a scrumptious prospect for the whole family…

You’ll be able to ‘discover' the new ROH for yourself when it takes part in Open House London Weekend (22 – 23 Sep, 10:00 – 18:00 free entry). You can engage in your own exploration of the new spaces (not forgetting the refurbished shop), see a display of some of the House’s landmark costumes, such as Margot Fonteyn’s beautifully preserved Black Swan tutu, and sit in the Linbury for the premiere of choreographer and film-maker Kim Brandstrup’s short film, Faces, starring Carlos Acosta, Alina Cojucaru and Zenaida Yanowski.

It really is ‘your ROH!’