7 CW readers are interested
Immersive horror: Variant 31 review 2 Immersive horror: Variant 31 review Freya Sanders
If you were in a horror movie, would you be the first to die or the last person standing? We went along to an immersive zombie apocalypse experience in London to find out. Variant 31 is billed as ’the world's largest live action video game experience' where you play the action character and decide where to go, what to do and how to survive.

The experience is created around a narrative: you are invited to Toxico Technologies' derelict laboratory to witness a top-secret demonstration of a new weapon, Variant 31. In the 90s, Toxico was notorious for its Frankenstein-esque experiments to bring back the dead. Just as rumours about mutations, corruption and deadly chemicals reached fever pitch, a fire broke out to destroy all the evidence. 25 years later, they've concocted a new serum that can control death and wreak havoc on the living.

As a player, you have volunteered to be part of the a 'test trial' and brave the labyrinthine corridors of a zombie-infested multi-story house in central London. The goal is to collect points and try and evade infection by aiming a toy guy at a zombie's head to momentarily disable them.

We were quaking in our boots as we suited up, but that fear quickly dissipated as we watched actors fumble through their lines during the introduction. Once into the house, the adrenaline was on high dial again, and for around 15 minutes, players we scared silly as the undead leaped out from behind corners and out of cupboards. The set was ambitious and attention to detail was chilling, with around five stories (not the 35 that the website promises) turned into a spooky set filled with charred libraries and sinister laboratories.

But 90 minutes is a long time. The concept of killing zombies with a toy gun and attempting to collect points quickly became stagnant after players started wandering up flights of stairs aimlessly, apparently diverted by a new goal – to collect clues from different rooms, the coherence of which never really became clear.

The concept of the experience was original, but the actual event fails to live up to the scale it promises. However, with some refining, it definitely has the potential to become the ultimate experience for horror fans far and wide. 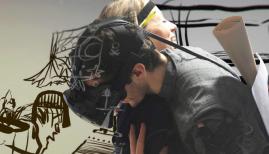 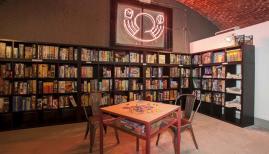 The best board games cafés in London