The welcome: some of the formality of the Mayfair original lingers in the immaculate staff uniforms and attentive service, but not enough to make those in trainers feel under-dressed. We relied on the charming waiter for tips on ordering

The room: the atmospheric and lively interior is a fitting addition to Soho's Wardour Street. Intricate wood carving, jewel colours and the lowest level lighting makes for a sumptuous, cavernous space, where tables are packed in tightly. You may need to squint to read the menu, but it’s well worth it for the softness of a flattering glow. 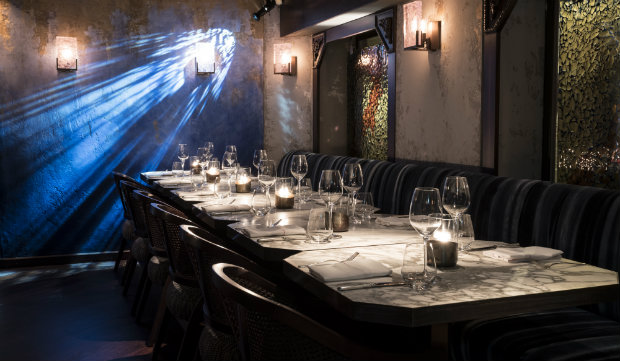 The food: cocktails burst with flavour thanks to generous additions of fresh mango, passion fruit, ginger and chilli. It's certainly worth settling in with a few drinks to whet the appetite.

The emphasis is on sharing, with a menu made up of appetisers, tandoor kebabs, curries, sides and vegetable dishes, so you can order broadly eat your way through multiple dishes. Highlights include the seared scallops, which are cooked just enough to stay meltingly tender in the middle, and the Pindi Channa, which the kind of richly spiced comfort food that proves the power of the humble chickpea.

Classics are given new clout thanks to subtle spicing: the chicken tikka is on a whole other level to the sugary scarlett gloop of most take-aways; and we are still thinking about the truffle naan (seriously, you won't want to share it).

The dessert menu is tempting enough to help you forget how you full you’re feeling and, though well and truly stuffed, we did not regret the dense, creamy cashew nut brownie.

Would we go again: yes, Tamarind Kitchen serves up the kind of topnotch Indian fare that Michelin judges raved about at Tamarind of Mayfair - without the formality or fine-dining prices.