Snacking gets the hipster treatment at new Soho concept cafe serving only overpriced crisps and dips. We review HipChips, London

There's nothing edgy or exclusive about those discs of deep-fried carbohydrate. They are the golden standard of salty snacks, best served straight from the packet. Special occasions call for Kettlechips, decanted into bowls, served with hummus, taramasalata and guac. Fruity attempts at making crisps fancier (Prosecco and Elderberry flavour, etc) have been largely ignored by the salt and vinegar/cheese and onion hungry public.

While bread's gone sour(dough) and cereal is a £6+ point of political protest, crisps remain gloriously normcore. You can eat them for under £1. A selection of flavours and a big tub of baba ganoush costs less than a Pret sandwich.

But, such is London's perverse bent to bestow haute-cuisine honours upon our humble staples, a new concept restaurant is serving crisps and dips - and only crisps and dips. HipChips, Soho, takes fried potato, and adds epithets 'heritage' 'vintage' and 'dessert' along with a crisp conveyor belt to justify prices ranging from £4.50 - £11.50.

Is the whole concept cafe a deep-fried hipster hoax, or a new mecca for luxe snacking? Culture Whisper dipped into Hipchips on the day it opened to find out. 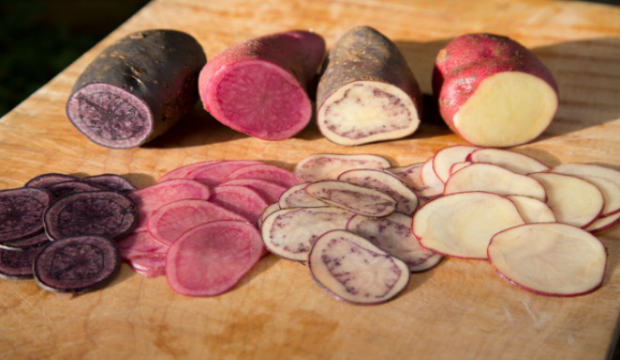 It's a surprisingly elegant, understated interior. A crisp conveyor belt dominates the counter. The artisan varieties of potatoes look like mixed up bags of vegetable crisps or bright autumn leaves, depending on your outlook. All are potato - either lightly salted or coated in sugar for 'pudding'.

The savoury crisps are fine: thicker, greasier slightly soggier texture than expected. Sugary crisps, though, are even worse than they sound. Loaded with more layers than than a jam-donut, they are overbearingly sweet. The only crunch comes from the granulated shell of sugar.

The dips, too, are disappointing. There's nothing wrong with a concept cafe or a gimmick if it does that one thing very well. The crisps are at least crafted, bright and different to anything we've seen from a packet. But even the most committed fried potato enthusiast loses heart when the the dips are ready prepared, processed-tasting and served tepid.

Again savoury is your best bet. It's an esoteric selection that omits everyone's favourites, but veggie cerviche (essentially a salsa) is tangy enough and smokey cheese is our favourite.

Pudding is best forgotten. The gooey, meltiness promised by s'mores dip was an uninspiring ganache, biscuit crumbs and a meagre two mini marshmallows. Creme Brulee is lumpy cold custard with more biscuit crumbs. A little blow-torching, or even microwaving would have gone a long way.

We leave feeling unsatisfied by a bit sick. If this is what hip means for crisps, we'll be uncool and stick with Walkers.