Part of the year-long Nordic Matters festival on the Southbank, Finland's Tero Saarinen Company brought its intriguing Morphed to the Riverside Terrace

Finland's Tero Saarinen Company last appeared in London in 2008 with Next of Kin, a piece widely regarded as deeply unsettling. It featured ghoulish makeup and costuming, the kind of theatrics Saarinen is so fond of.

By comparison, Morphed appears rather tame. However, the pleasure Saarinen takes in creating this brand of indefinable work is still evident in this intense slice of interplay among a band of seven performers.

TRY CULTURE WHISPER
Receive free tickets & insider tips to unlock the best of London — direct to your inbox
Morphed premiered in Helsinki in 2014, has toured internationally since and has now reached the Riverside Terrace in front of the Royal Festival Hall building as one of the many elements of the Southbank's Nordic Matters festival. It examines the relationships between its cast members using Saarinen’s signature style of choreography, which blends brutal and aggressive movements with soft and elegant gestures.

Esa-Pekka Salonen's emotive score is what sets Morphed apart from other Saarinen work. The score is such a defining aspect of this piece it feels like an eighth member of the cast. It lifts the piece, providing shape and purpose as the audience attempts to untangle the nuanced interplay between the seven men. Its dramatic presence also adds to the theatrically and texture.

Morphed starts slowly in minimal light with five minutes of pacing where all seven performers head in different directions. As the score dictates, the pacing becomes more urgent and there are jarring moments of stopping and starting. At this early stage the performers brim with energy and physicality.

The men are all dressed identically in dark jackets and jeans. The movements are interspersed with further stopping, extended moments of silence and carefully placed lunges and poses by each individual, before Saarinen examines their associations with each other.

The sections of synchronised choreography are beautifully done with all performers demonstrating exceptional grace and finesse; but it is not long before there is disarray in the ranks and chaos ensues.

The heavy jackets are discarded, firstly by one man, who is cast out from the group. They form a human chain, blocking him from moving freely and from here on the piece becomes increasingly physical.

Vertical ropes hang from all sides of the stage, and as emotions become more turbulent they sway violently magnifying the sense of frenzy and disruption.

Saarinen then splits the men into groups of twos and threes. At this point the piece becomes a more laborious watch, as if Saarinen is running out of ideas.

The standout performance comes from Ima Iduozee, a wonderfully versatile dancer who is strong and powerful in the faster sections, but who also demonstrates great artistry and agility in the slower sections. His face successfully conveys the turmoil present in the latter moments of the piece.

It seems nonsensical to criticise the length of a piece when the running time is only an hour, but Saarinen undeniably loses his momentum in the second half of Morphed. The first thirty minutes are hypnotic and exciting, whereas the second half-hour is slower paced and the choreography loses out to the dominant musical score.

Note: Morphed was part of the extensive year-long Nordic Matters Festival at the Southbank, which continues until 14th January 2018 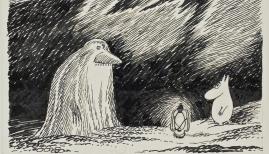 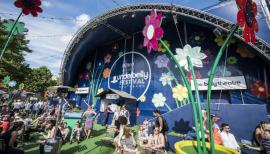 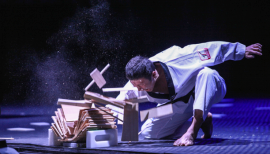