Kylie Minogue, The Jacksons and Busted number amongst the stars of Hampton Court Palace Festival 2019

The party at Henry VIII's sumptuous stomping ground will be kicked off on 6 June by Jools Holland, the evergreen king of boogie-woogie whose Rhythm & Blues Orchestra never fails to pack a punch. The same weekend also welcomes noughties pop-rockers Busted and The Jacksons, who gave us the 70s hits 'Blame It On The Boogie' and 'Shake Your Body (Down to the Ground)'.

Finally, the celebration is closed out by five consecutive days of musical performances: two nights of new wave legends Tears for Fears, two nights of the inimitable Kylie Minogue, and a firework finale on 22 June starring Michael Ball and Alfie Boe. The two English singers are performing hits from their 2017 chart-topping album Together Again, a gorgeous selection of West End and Broadway classics.

Tickets grant entry to the palace’s splendid East Front Gardens from 5.30pm on performance days. No food and drink can be brought in, but there’s dozens of bars and food stalls from which to grab refreshing summer tipples and a range of gourmet street food.

If you’re feeling particularly indulgent, help yourself to one of four specially-created Fortnum & Mason picnic boxes, which contain four courses of delicious picnic snacks and a bottle of premium wine. Or better still, enjoy an exclusive dining package in one of the palace’s State Apartments.

Whatever takes your fancy, make sure you’re finished by 8pm to take your seat stage-side for a royally-good gig in Hampton Court's open air. 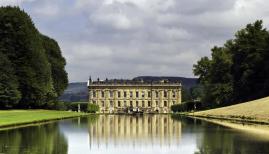