This is interesting timing for other reasons for former editor-in-chief of Vogue Paris Carine Roitfeld. She manages her own high-end fashion magazine, CR, which is released twice a year. Having had business partner Stephen Gan by her side for four years, two days before her Uniqlo collaboration launched sources announced they were no longer working together. Roitfeld will work alone at the head of CR, and the publishing rights are now solely in her name. A strange turn of events during a week of media scrutiny on her and Uniqlo.

Uniqlo is the Japanese casualwear giant with nine London stores. It's big hitters are high-performing winter clothes at low prices, from impressive puffer jackets and thermal tights with clever fabrics behind them. Despite the utilitarian nature of their clothes, they've hosted some impressive designer collaborations, such as Jil Sander, Opening Ceremony and Liberty. 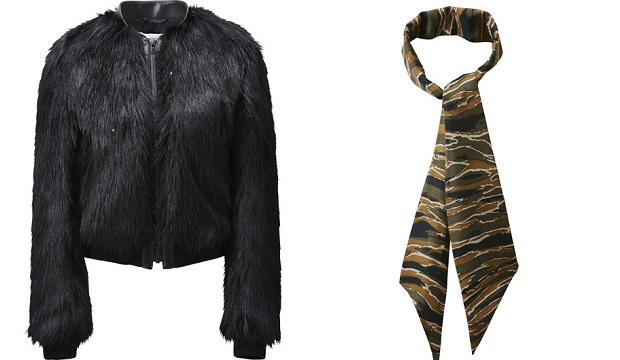 To Roitfeld's collection, then. Plucky wardrobe essentials have gone on a Grand Tour to find themselves. After a spin around Roitfeld's Paris they return elegant, grown up and a little subversive. The look is appropriately French chic and it is the outerwear that stands out, with black, military-style pieces, shiny trench coats and fur coats in spiky black and leopard print. Everything is styled with straight, swinging shoulder-length brunette hair and a certain nonchalance.

We are prepared to fall in love with leopard print for the tenth time this decade at the sight of Roitfeld herself clutching a fur collar to her chin below smouldering eyes and saying she doesn't like to style fur with wool, "'I think it's more sexy with the silk and with the décolleté, no?" Well, yes. If silk slips in winter climates don't appeal, the sleek silk scarves act as a perfect foil to the textured coats instead.

A series of well-cut pencil skirts and dark long sleeved tops make up the rest of the collection, nodding to Uniqlo's reputation- still the place to go for great value basics that will work season after season.