Second Home celebrates '70s subculture cinema with a series of film screenings and a two-course dinner at Jago restaurant.

Land of the Free: 70's Subculture Cinema Land of the Free: 70's Subculture Cinema Caroline Halstead
The Land of the Free
Shoreditch's innovative start-up hub Second Home is hosting a series of curated film screenings evoking the hippie era and 1970s subculture.
200 Motels
First to be screened on 26 March is Frank Zappa's musical surrealist film 200 Motels, portraying the madness of life on the road for a peripatetic rock musician. Dubbed a mad, surreal mockumentary, the film stars The Who's Keith Moon, The Mothers of Invention, Theodore Bikel and Ringo Starr, and has rarely made it on to the big screen since its 1971 release. Nonsense vignettes intersperse with concert footage: the plot's besides the point, but its evocative rock and roll cinematography has made it a cult classic.
The Last Movie
Next up is The Last Movie, on 2 April from the screenwriter of Rebel Without a Cause Stewart Stern and Dennis Hopper. The film's unconventional, often jarring editing style reflects Hopper's drug-addled state of mind during production, yet is seen by many as adding to its charm. This 1971 release stars Hopper himself alongside the likes of Stella Garcia, Julie Adams, Sylvia Miles and Peter Fonda. 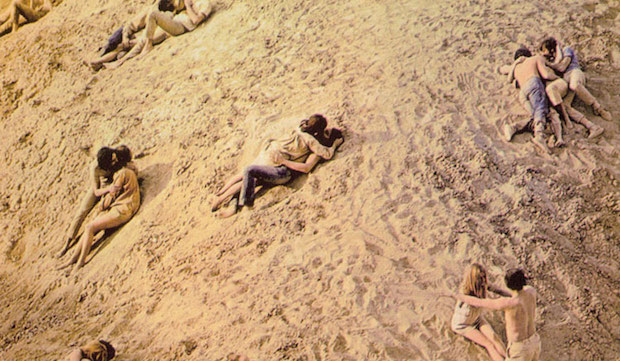 Zabriskie Point
On 7 April midway through the season they'll be showing Michelangelo Antonioni's beautifully shot and recently rereleased Zabriskie Point. The title refers to the isolated mountain range in Death Valley, California, and the film itself an under-appreciated counterculture adventure, reminiscent of Easy Rider and Bonnie and Clyde. Though panned by critics on its release in 1970, Zabriskie Point has since become a classic and is noted for its stunning cinematography and score, featuring the likes of Pink Floyd and Jerry Garcia.
Harold and Maude
Next in the line-up, on 16 April is Hal Ashby's cult black comedy Harold and Maude: an unconventionally beautiful film about the relationship between Harold, a wealthy young man obsessed with death and Maude, an eccentric, 79 year old woman with a zest for life.  This unconventional yet heartwarming film is supplemented with the lilting musical accompaniments of Cat Stevens: a bildungsroman with a twist, Ashby's 1971 classic has earned a place in cinematic history.
Valerie & Her Week of Wonders
Last in this iconic series comes czechoslovakian surrealist film Valerie & Her Week of Wonders on 21 April. Based on the eponymous 1932 novel by Vítězslav Nezval the film follows Valerie as she traverses through a disoriented dreamworld, clashing with characters from priests to vampires. A jarring and occasionally frightening film with powerful backing by Lupos Fiber, this hidden gem will end the series on a suitably surreal note.
On the menu
Visitors to Second Home are also invited to enjoy a two-course meal at Jago, their onsite restaurant, from ex head chef at Ottolenghi. The menu focuses on European, Middle-Eastern and Ashkenazi influenced cuisine, featuring the likes of grilled beetroot polenta with goat’s curd, kohlrabi and sorrel, or beef short rib with celeriac and pickled walnuts.
There's also an enticing sounding bream fillet with jerusalem artichokes, monk’s beard brown butter and capers, or try their succulent pressed pork belly with hispi cabbage and green sauce. The package includes dinner (served at 6.45pm) with either a starter and main, or main and dessert, as well as a ticket to any of the screenings, which commence at 7.45pm. Guests are also welcome to enjoy a pre-dinner drink in Jago beforehand.
Click here to go to Jago's website for more of what's on the menu.

CultureWhisper members can enjoy an exclusive package to this event. Click here to see more of our March exclusives.