Now the Chinese choreographer Yang Liping brings her own Rite of Spring to Sadler’s Wells, which co-produced the work. This is the first return of her troupe since her 2016 visually arresting Under Siege and it sees her collaborating again with set designer Tim Yip (of Crouching Tiger, Hidden Dragon fame), so the aesthetic is strong and specific.

The work is in three sections: the first a meditative scene where characters are introduced. As the audience take their seats the stage is set: 12 statue-like females are deep in prayer, while a lone Monk is involved in hard labour with hundreds of Chinese characters.

For a long time that’s all that happens, so our attention is drawn to the cinematic set, while listening to Xuantian He's Tibetan influenced score. The odd recorded gong helps keep the audience focused, as at this point it’s all a little flat.

When movement does begin it's pretty generic, mostly arm and finger based, steady phrases punctuated with dynamic images you'd associate to China or the East.

Then a giant hairy Chinese Lion enters the plot. He meets a unitard clad Lady with free flowing hair. The Lion navigator reveals himself as a jockstrap-wearing aggressive ceremonial master. The pair begin an uncomfortably graphic duet, presumably meant to embody the fertility rites associated with spring: they contort around each other in slow motion with some decidedly lewd partnering – lots of pelvis action, open crotches and bare buttocks.

The scenes take place in an order that doesn't seem to have any thought out intention. And the interchanges aren't helped by the presence of many onstage technical staff clunkily removing paraphernalia.

Enter Stravinsky. And as the striking opening bars of his Rite penetrate the theatre, sets of ultraviolet fingernails emerge, wiggling fingers repeating movements we’d seen before. The female cast are placed in a long line centre stage with their feet in fixed stirrups. Thus rooted, they shift their weight into relentless body undulations, reminiscent of a demonic centipede.

It's high ultraviolet drama with little emotional impact; visuals alone do not obviate the need for meaningful content. It’s as if someone saw a few seconds of Pina Bausch's seminal production and thought ‘yeah, that's the vibe' without considering how the choreography got to the climactic point of bedlam.

The solo of the sacrificial victim has a similar feel, but with the added hassle of the ceremonial master slapping Chinese characters all over her body as she's offering herself in ‘earthbound duty to her community.’ The moment of glory culminates in frenzied whirling, before the Lion comes back and finishes her off with a big bite.

Yang Liping brings in a crucial element of Chinese culture by opting to have the sacrificial victim return reincarnated and purified through her sacrifice: as the work ends, she is seen floating around on very visible wires at the back of the stage projecting inner peace.

Considering how much went into this production, we have to conclude it didn’t fulfil its potential, nor bring about a relatable fusion of East and West. 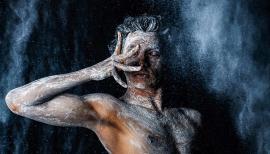