Company Wang Ramirez comprises of the two performers and choreographers, Honji Wang and Sébastien Ramirez. Together, they cultivate a style rooted in hip-hop and contemporary dance, and Dystopian Dream is the stage interpretation of composer and musician Nitin Sawhney’s 2015 album of the same name, that was initially a response to the passing of his father.

As such, this interpretation of Sawhney’s work is an exploration of mortality, and a search for meaning and significance in life. In addition, Dystopian Dream is a sensory overload, shrouded in stylish attributes, from Natasha Chivers’ deeply atmospheric lighting and Shizuka Hariu’s versatile set designs to Eve Stone’s wonderfully haunting voice. Wang Ramirez have created a stage experience packed with drama and emotion.

The performance follows the order of the 15 tracks of Sawhney’s album. The story is ambiguous, but moments of tension, urgency and even humour are prevalent at different stages. Stone is the first figure we see; she murmurs indecipherably as she is met by a faceless figure (Ramirez, presumably representing death) who walks at a horizontal angle across the back of the set, each step setting off different projections and impacts. Wang enters via a wire suspended from the ceiling. Chairs are thrown on stage and slickly caught. The easy way is never taken, the audience is always left guessing.

Wang is a mesmeric mover who responds seamlessly to the different musical influences. She is initially sharp and staccato in the pulsating track ‘Days R Gone’, and later graceful and fluid in the more mellow ‘Silence’. The strength and maturity of dancing that comes from her small frame makes her incredibly watchable.

Ramirez discards his mask after some time, showcasing himself in a section of more hip-hop choreography with breakdancing and floor spins. Together, Wang and Ramirez share a turbulent chemistry; tactile and needy in some numbers, distant and aloof in the next, but whatever the dynamic, Stone appears to upset the particular balance.

There are brief moments of physical, breathy conflict as their dispute comes to a head before Stone and her murmurs gradually fade away. Once again Ramirez’s faceless character quietly attaches wires to her billowing dress and she is slowly airlifted from view in silence. It’s a powerful image and perhaps the only moment in the performance with an obvious reference to death, yet it feels strangely peaceful.

Whatever themes Sawhney and Wang Ramirez are grappling with, Dystopian Dream is a sophisticated evening out, part dance, part music, part piece of art – the result is hypnotic. 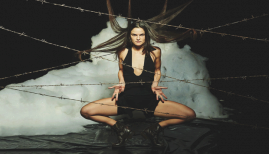 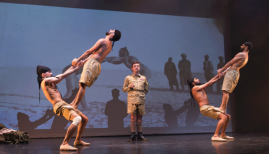