The Royal Ballet's Swan Lake in its sumptuous new production is such a hit that live performances at the Royal Opera House soon sell out. But if you've been unable to see it at Covent Garden during its extended spring run, worry not: a performance of Swan Lake will be relayed live to a cinema near you on Thursday 19 May; and if you can't attend that, then the recorded Encore is the following Sunday, 22 May.

Swan Lake, with its luscious Tchaikovsky score and massed ranks of perfectly synchronised white swans framing the doomed loved affair between the Swan Princess and Prince Siegfried is one of the glories of classical ballet. The Royal Ballet's current production, devised by the late Liam Scarlett, spares no expense with John Macfarlane's sumptuous sets and costumes, recreating in dazzling fashion the gardens and ballroom of Siegried's palace, and the harsh desolate lakeside inhabited by the maidens bewitched by the evil von Rothbart.

Scarlett followed the original Petipa choreography, but brought in some changes: in the prelude he shows the transformation of the young princess into a swan; she's to return to human form only after death when she's carried from the depths of the lake by the inconsolable Siegfried. Scarlett's von Rothbart doubles as sorcerer and evil courtier, intent on stealing the crown for himself.

The basics remain the same, though: a melancholy Siegfried falls in love with the White Swan Odette, and swears eternal love; he is fooled by Odette's evil double, the Black Swan Odile into betraying his oath, thereby condemning Odette to a life as a swan; heart-broken Odette throws herself into the lake and drowns.

The dual role of Odette/Odile is one of the pinnacles of a ballerina's career. in this performance it'll be danced by the Royal Ballet principal Lauren Cuthbertson. Her Siegfried is first soloist William Bracewell, an attentive partner whose elegance and pure line are always a wonder to behold. 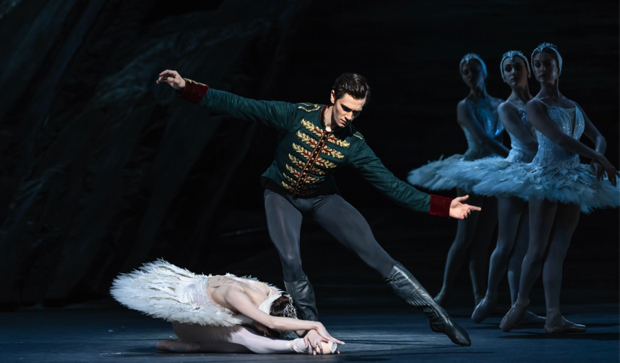 Lauren Cuthbertson as Odette, William Bracewell as Siegfried in The Royal Ballet Swan Lake. © 2018 ROH. Photo: Bill Cooper
In short, this live relay is a must-see and we can't recommend it highly enough.