The moment the first notes of Meyerbeer’s music rise from the orchestra pit, a mood of carefree pleasure settles into the ROH and is intensified as the curtain goes up on William Chappell’s magical set: a dazzling white ice-skating rink, surrounded by curvaceous lacy columns suggestive of a winter funfair.

Les Patineurs is one of Frederic Ashton’s most popular works. Created in 1937, it’s been acquired by a large number of companies and is a staple of the Royal Ballet’s repertoire. It’s not difficult to see why: its jolly portrayal of a group of young people enjoying the pleasures of ice-skating is a delight.

The cast, dressed in 19th century costumes in white, turquoise and brown, glide around the stage, the joy and exuberance of their dancing belying the sheer difficulty of Ashton’s choreography, arranged in kaleidoscopic patterns as intricate as the traces left by the skaters on the ice.

As well as an ensemble of eight, Les Patineurs offers variations for different groupings and one solo. In the Blue Boy solo, Marcelino Sambé shows off his impeccable technique with multiple turns, feather-light jumps and always a cheeky smile – ‘see? that was easy!’ In the entrée the enveloping musicality of Yuhui Choe and the up-and-coming Anna Rose O’Sullivan is a wonder to behold.

The mood alters radically with the second piece of the evening, Kenneth MacMillan’s Winter Dreams. Inspired by Chekhov’s play Three Sisters, it was never MacMillan’s intention to create a full narrative ballet; rather, he said, ‘to capture the atmosphere and melancholy of Chekhov’s masterpiece.’

Set to a series of short pieces by Tchaikovsky interspersed with traditional Russian music played by a balalaika ensemble placed up-stage, Winter Dreams is an episodic work, built around three sisters, who feel stifled by the emptiness of life in a small Russian town and pine for the Moscow of their childhood.

With a few broad brushstrokes MacMillan introduces the sisters: the eldest, dutiful Olga (Itziar Mendizabal), the youngest, flirty Irina (Yasmine Naghdi) for whom two men will end up fighting a duel; and the middle sister, Masha (Marianela Nuñez).

A work with more than its share of longueurs, Winter Dreams will stay in your memory or not depending on the intensity of its central love affair between Masha, who’s trapped in a loveless marriage with the teacher Kulygin, and Lt Colonel Vershinin (Thiago Soares). 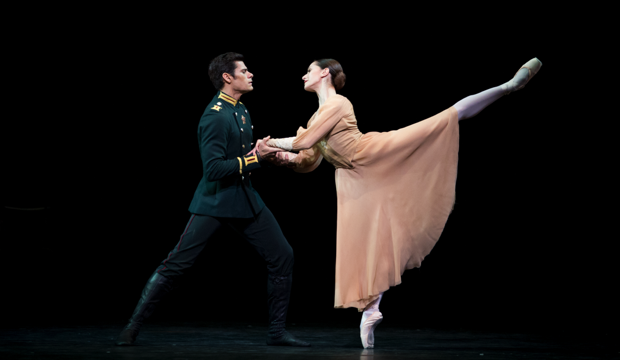 As Masha Marianela Nuñez is sublime, her every gesture containing every nuance of her struggle from dutiful, yet weak resistance to complete surrender to a love of despairing intensity. Sadly, Thiago Soares, though a solid partner, is woefully miscast as Vershinin: he shows none of the combination of military bearing, arrogance and recklessness, and animal passion that wins over Masha; and his technique, too, leaves a lot to be desired.

With the central pairing misfiring, praise is due to the rest of the cast, most particularly Gary Avis, stepping in at the last minute and achieving true pathos as Masha’s dull, inept, but ultimately decent husband.

The last piece of the evening is Jerome Robbins’ sui generis The Concert, a comedy piece that goes from gentle fun to riotous madcap shenanigans, as a group of disparate concert goers converge onto a park where the unflappable pianist Robert Clark plays Chopin, and gradually lose all sense of propriety.

The piece tests the cast’s comedic ability, but to the last dancer they rise to the challenge, in particular Lauren Cuthbertson as the girl groupie; and the truly wonderful Laura Morera as the imperious shrew with her comic timing sharpened to the split second. 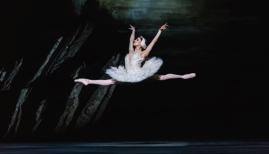 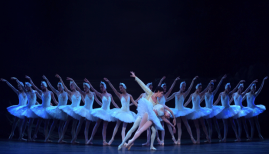