With costumes created specially by the house of Chanel, a highly effective set made up of large irregularly placed dark panels (Maria Tregubova), video projections by Ilya Starilov and atmospheric lighting by Ivan Vinogradov – and all this exclusively in black and white – visually Gabrielle Chanel is a classy affair.

However, narrative ballets are not easy to pull off. If they are to work, then both steps and musical score have to be able to tell a story and encapsulate a range of emotions. See, for example, any of Kenneth MacMillan’s works; or listen to the narrative clarity of Délibes’ score for Coppélia.

Gabrielle Chanel starts well. In a kind of prologue, Coco, dressed in her trademark tailleur and hat, looks at herself in the mirror and images from her life flow before her eyes in the shape of grainy black and white video projected onto one of the large hanging panels.

We then move to a Paris café, where the young Coco and her aunt (Anna Turazashvili) are performing. It’s a lively scene, which serves to introduce the rich playboy Étienne Balsan (Bolshoi principal Mikhail Lobukhin), with whom she starts an affair.

Subsequent scenes take us through seminal moments in Chanel’s life, introduced by quotes from her own thoughts spoken in French (with English surtitles) and projected in cursive onto the stage panels.

We’re taken to her first couture studio, opened when she was barely 20 years old, where seamstresses busy themselves and Coco sets about developing her unique style. Later we witness the creation of her signature Chanel No 5 scent by a group of men carrying five oversized perfume flasks.

There’s a scene on Diaghilev’s Ballets Russes, which awakened in Chanel a love of ballet and led to a friendship with the company dancer Serge Lifar (Bolshoi principal Vyacheslav Lopatin).

And so on. No mention, however, of the second world war and Coco Chanel’s closeness to the Nazi occupiers, which most biographers see as a determining period of her life and, indeed, career.

With generic music and choreography by numbers, none of this engages your heart. Zakharova is technically superb, her long legs and super-extensions much in evidence, but there is no emotional give in anything she does. Not even the pas de deux with the supposed love of her life, the English polo player Arthur Capel, danced by the truly remarkable Jacopo Tissi – tall, elegant, and possessed of a harmonious line – manages to stir anything inside.

The first piece in the programme is Mauro Bigonzetti’s Come un Respiro, which purports to find the sighs and breathing spaces within its Handel score but does nothing of the sort, producing instead acrobatics with little purpose. It is, however, dressed with a measure of daring originality by Helena de Medeiros, the women’s puffed feathered tutus obviously inspired by the shape of ostriches. 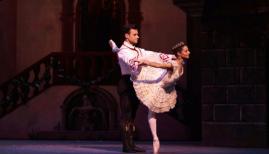 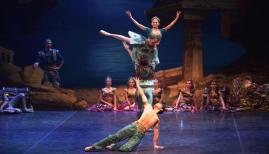 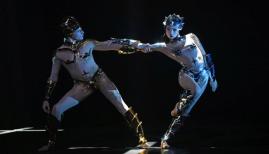