Rasputin was a mysterious figure who felt himself misunderstood – it’s easy to understand his appeal to the maverick Polunin.

Oishi’s narrative depicts how the monk Rasputin won the trust of the last tsar, Nicholas II (Alexey Lyubimov), with attempts to heal his haemophiliac son, Alexei (Djordje Kalenic), but was later condemned by the public and murdered by aristocrats.

Kirill Richter’s turbulent but driving score brings some sense of purpose to the underpowered choreography, while Ulyana Sergeenko’s costumes are rich and opulent, fitting for the Russian monarchy. Symbolically, the stage depicts a chess board. 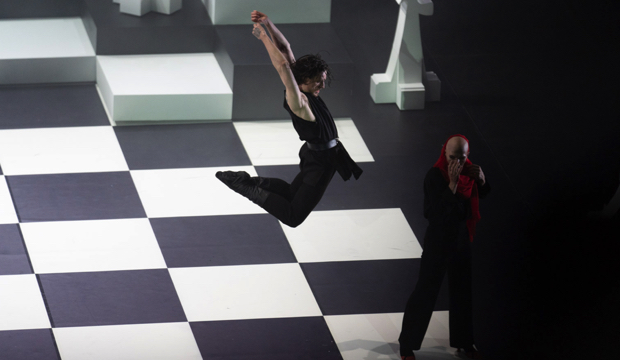 The narrative plods disappointingly with brief flurries of action and drama to showcase Polunin.

Unlike in the earlier mixed bill (see review below), Polunin has some significant sections of choreography to get stuck into, most notably a sequence of furious warp-speed fouettés that elicits enraptured applause from the audience, like a show pony performing party tricks.

His jumps reach greater heights than earlier in the week and his attention seems more focussed with a character to channel, but it doesn’t make for a fully cohesive evening.

Naturally, there is tangible chemistry between Polunin and real-life girlfriend Elena Ilinykh as Tsar Nicholas’s wife, Alexandra Feodorovna. She emotes convincingly but her background as a ice skater is evident as she fumbles through the choreography. Kalenic demonstrates maturity and confidence as the young prince and dances with appropriate regal elegance and spark.

Johan Kobborg is full of lightness and exuberance as the aristocrat Prince Felix Yusupov. With his jaunty demeanour and colourful costuming he is the antithesis of Polunin’s Rasputin. The two share a climactic but brief tussle in which Rasputin’s demise seems a rushed affair.

Oishi’s Rasputin is an improvement on her lamentable works in the previous triple bill, and there are small glimpses of Polunin’s prowess, but they are not enough, and together with the uneven narrative we're left with a feeling of incompletion.

Programme I starts with Fraudulent Smile – less smiley, more fraudulent. Set by Ross Freddie Kay to KROKE’S carousel music on a loop, it starts with a band of jobbing dancers in trousers held up by braces over naked torsos and faces painted white. Very Marcel Marceau. They may be funny or sinister (it’s unclear), but they are definitely under-rehearsed.

Polunin appears to have a girlfriend, in black stockings, suspenders and a flimsy chemise, but Johan Kobborg - he is definitely sinister - strangles her. So, Polunin marches in clutching a pineapple, but she’s not there. Though she does come back at the end.

After the interval comes a piece for two men, choreographed by Yuka Oishi, which we would describe as homoerotic, except we know Mr. Polunin doesn’t countenance any such thing. Named Paradox, it’s danced by two men (Alexey Lyubimov, Dejan Kolarov) and apparently inspired by Nijinsky’s diaries – not so as you’d know.

Snatches of music by Stravinsky and Chopin are interspersed with a plummy English male voice intoning words that refer in the first instance to soldiers, then seemingly to consumerism. Intriguing.

All builds up to the grand finale, Oishi’s Sacré, an extended Polunin solo to a criminally distorted and bowdlerised version of Stravinsky’s The Rite of Spring. Within a circle of dead tree leaves, Polunin, sporting an unruly mop of hair and a sparse goatee, does much walking around, some balletic jumping, and a lot of histrionic emoting.

It’s a never-ending riff on the ‘tormented bad boy’ image; but if you don’t buy into the narrative, it’s all profoundly tiresome.

And when Polunin has wrapped himself in thick ropes and collapsed in a heap centre stage, and you think it’s finally over, a dancer in his undies pads on and does some academic ballet exercises. Degagé forward. Arms to fourth position.

It’s all sadly predictable; but the mystery is why Johan Kobborg, a dancer with a stellar reputation to protect, is happy to associate himself with this farrago in the twilight of his career.