Starstruck, Scottish Ballet’s sparkling reworking of an old Gene Kelly ballet, has made a seamless transition from stage to film and can be viewed on Marquee TV

We don’t see much of Glasgow-based Scottish Ballet in London. More’s the pity: this is the most creative and original of the main UK ballet companies, as it’s just demonstrated with its latest project, Starstruck.

A stage recreation and reworking of a work by the great Gene Kelly, Starstruck is also now a purpose-made film, and a very enjoyable one it is, too.

A little background first: in 1960 Gene Kelly became the first American choreographer to premiere a ballet at the Paris Opéra. Called Pas de Dieux, and set to Gershwin's joyous Concerto in F, it also marked the first time that jazz had been played at the august Palais Garnier.

Pas de Dieux was acclaimed at the time as a ‘happy, sexy, modern ballet’ and ‘a breath of fresh air’, but has rarely been performed since.

And not content with having a new, delightful stage work for Scottish Ballet, Hampson went one step further and enlisted the talents of film director Oscar Sansom to create a film that would be not just a record of performance, but rather would stand on its own as a ballet film.

The result is Starstruck, a pulsating film that often gives its audience the illusion of sitting in the theatre watching a live performance. 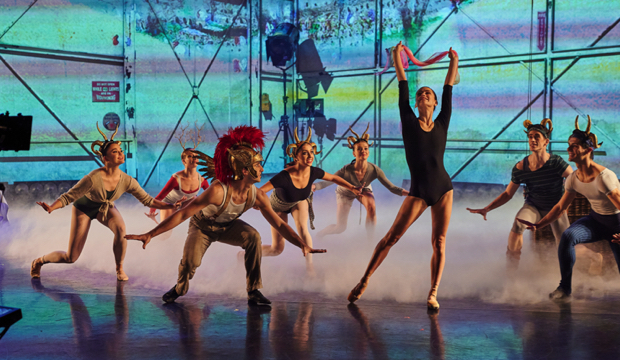 Principal Sophie Martin on the set of Starstruck. Photo: Gavin Smart
Structurally, Starstruck is a ballet within a ballet, which tells you quite a bit about the creative process. Hampson added his own touches to the opening, set in a ballet studio, where, lulled by a medley of Chopin piano pieces, we get acquainted with the company dancers with their individual quirks and collective dynamics.

The plot of the ballet within the ballet is a little convoluted, but still madly enjoyable: The Choreographer himself plays Zeus, the Ballerina his wife Aphrodite, who’s bored with life in Mount Olympus and so decides to have a little fun in the south of France in the company of her trusted friend Eros (a delightful performance by the irrepressible soloist Bruno Micchiardi, complete with golden wings).

All manner of havoc follows, obviously, and that translates to the studio, where life inevitably starts to imitate art; but eventually everything settles down and the Star Ballerina and the Choreographer transport us to the premiere of the new ballet at the Paris Opéra, where the whole company joins in a fizzing finale.

The choreography of the ballet within the ballet is pure Gene Kelly, which is to say, it’s a mixture of all manner of styles, with jazzy ensemble numbers straight out of Broadway, combined with balletic pas de deux; and Scottish Ballet dancers acquit themselves gloriously in a style which up to now many had not been familiar with.

In short, Starstruck, the ballet, is a triumph and Sansom’s film the stylish next best thing to seeing it in live performance.