Maliphantworks, a carefully curated selection of works by acclaimed choreographer Russell Maliphant, is showing in the perfect setting of the Print Room at the Coronet

Choreographer Russell Maliphant has developed a style of dance all his own. His movement is grounded, slow and sustained, effortlessly combining elements from classical ballet, in which he trained at the Royal Ballet School; contemporary dance; and influences from Eastern disciplines, such as Tai Chi.

In selecting extracts from past works for this programme, Maliphant was mindful of the unique space offered by the Print Room at the Coronet; and the programme proves a marriage made in heaven.

The first of the evening’s four dances, Wall, is performed in the Print Room’s compact studio. Against a high and forbidding wall, Tommy Franzen and Dickson Mbi are restless young men, their pent-up energy exploding in bouts of controlled dancing, crouching, leaping, sometimes separately, at others coming together but always very much in thrall to that insurmountable wall.

'Wall' is today a powerful meme, such as it wasn’t when this piece was created in 2012; and that this work is capable of absorbing and transmitting new meanings is testimony to the versatility of Maliphant’s work.

The remaining three pieces are performed in the main theatre space. This involves much shepherding of the audience to and fro; but there is such charm to the dimly lit and vaguely labyrinthine corridors of the Print Room that nobody seems to mind much. 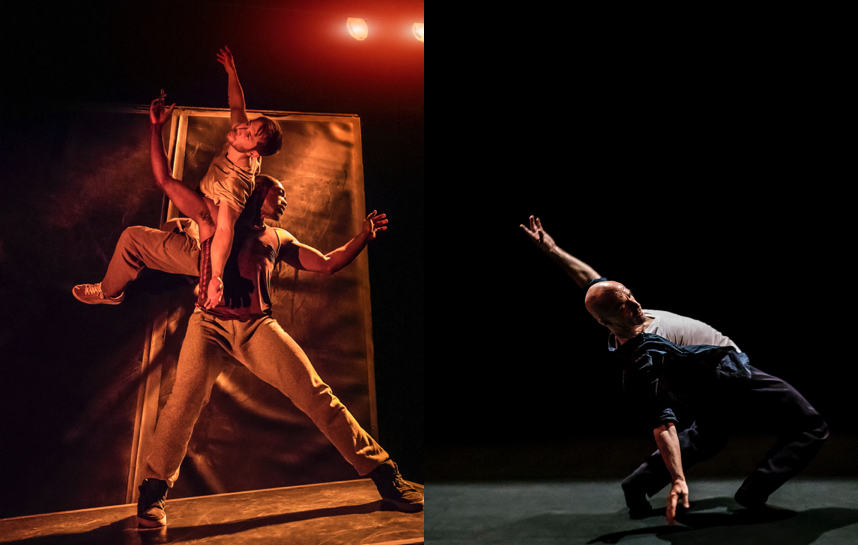 Maliphant himself dances the second piece of the evening: One Part II, which is also the oldest work on show, having been created exactly 21 years ago. Maliphant danced in the original production; and he writes in the programme that he was keen to 're-engage with the physical side' and also 'to understand more about the physically evolving experience of age'.

We can tell you that at 55, Maliphant remains a compelling dancer, his lithe body a perfect vehicle for his own work.

Next comes Two, again a solo piece danced by another of Maliphant’s key interpreters (and his own wife), Dana Fouras. This is an extraordinary work, where Fouras remains enclosed in a small, dim rectangle of light within a lighter frame, and all the dancing comes from the torso and arms that fold and unfold like the wings of a large captive bird.

The final piece in the programme belongs to one of the most expressive and mesmerising dancers alive today: Daniel Proietto. Maliphant created Afterlight (Part One) for Proietto in 2009 on the haunting music of Eric Satie’s Gnossiennes.

Standing at the centre of a slowly rotating small pool of marbled light, such is the delicacy of Proietto’s initial movement that he appears to be turned by the light itself. Gradually the pool of light expands and so does the dancer’s movement. He turns like a whirling Dervish, he bends back, his arms stretch outwards and upwards in a gesture of perpetual yearning.

It is a tour de force; and an unforgettable one.

All four pieces are lit by Maliphant’s long-term collaborator, the award-winning lighting designer Michael Hulls. Together, Maliphant and Hulls have developed a unique visual style – one which fits the atmosphere of the Print Room to perfection.

Note: for the first piece of the evening performed in the studio the audience is split into two consecutive groups. A coloured dot on your ticket indicates whether you are in the first group or the second. While you await your turn, you can enjoy a drink or two in the Print Room's highly atmospheric bar.